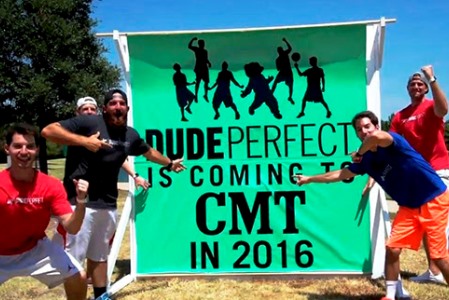 The series from Rob Dyrdek's Superjacket Productions will follow the team as they prep for performances and video shoots.

Dude Perfect, the team of five friends who vaulted into Internet fame via their clips that combine sports stunts with comedy (and a panda mascot), will come to television in 2016 via a series for U.S. cable net CMT.

Rob Dyrdek’s Superjacket Productions will follow the troupe out of its Dallas headquarters as it prepares for live appearances and video shoots. Dude Perfect – comprised of Tyler Toney, Cody Jones, Garrett Hilbert, and twins Coby and Cory Cotton – have more than 23 million fans and followers and the top sports channel on YouTube, according to CMT.

The group, which is part of the Whistle Sports MCN, has also paired with LG for a brand partnership in a recent Lacrosse video, and have even teamed up with Ant-Man star Paul Rudd for a recent promotional video.

“Way beyond the insane trick shots, these guys are truly an All-American brotherhood that turned a passion into an amazing business,” said Dyrdek, who will exec produce The Dude Perfect Show (w/t) along with Superjacket’s Shane Nickerson, in a statement. “This show will give their fans and the world an inside look at their camaraderie and the fun they have behind the viral hits they produce.”

Exec producers for the Viacom-owned CMT are Jayson Dinsmore and Matthew Trierweiler.