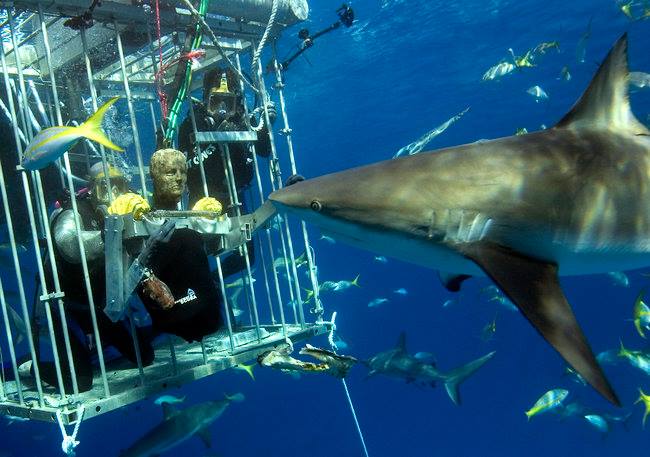 With the right gear, viewers can submerge themselves in the deep blue sea to swim with sharks - for free.

As the countdown to 2016 – which many predict will be the year virtual reality will take off – ticks away, new VR initiatives by established networks and production companies seem to be cropping up at an exponential rate.

The latest to offer its content in 360 is Discovery.

DiscoveryVR.com launched Aug. 27 with a slate of VR-optimized videos (usually referred to in the VR industry as “experiences”) from series such as Shark Week by Mythbusters (pictured) and Survivorman, as well as original VR experiences adventuring through Muir Woods, Half Moon Bay and across San Francisco on a skateboard.

The experiences are available in 360 or for a conventional screen through Discovery VR’s site, on YouTube, on the Samsung Gear VR headset or on iOS and Android devices (which can be converted into VR viewers through handmade headsets like the Google Cardboard). All are free for download.

Discovery first announced it would foray into the VR space at New Fronts in May.

While viewing technology is still limited and can be quite pricey (the Samsung Gear headset is $199, but that doesn’t include the price of the Samsung Galaxy Note 4 that is used as the screen), VR itself is becoming increasingly high profile as some big names try their hands at VR projects.

Some more recently announced projects include the VR experience based on the John Wick action film, an experience set inside the walls of a maximum security prison and a creepy short based on the horror film Insidious III.

But VR isn’t all 360 suspense and horror.

Plenty of non-fiction works have been created or are currently being developed for VR. In 2014, Conquest of the Skies, a wildlife documentary backed by Sir David Attenborough and optimized for the Oculus Rift headset, began filming in Borneo. And L.A.-based studio Secret Location recently helped the L.A. Philharmonic bring its music to the people as they helped to produce Van Beethoven, a VR experience depicting a performance of Beethoven’s Fifth Symphony by the orchestra.