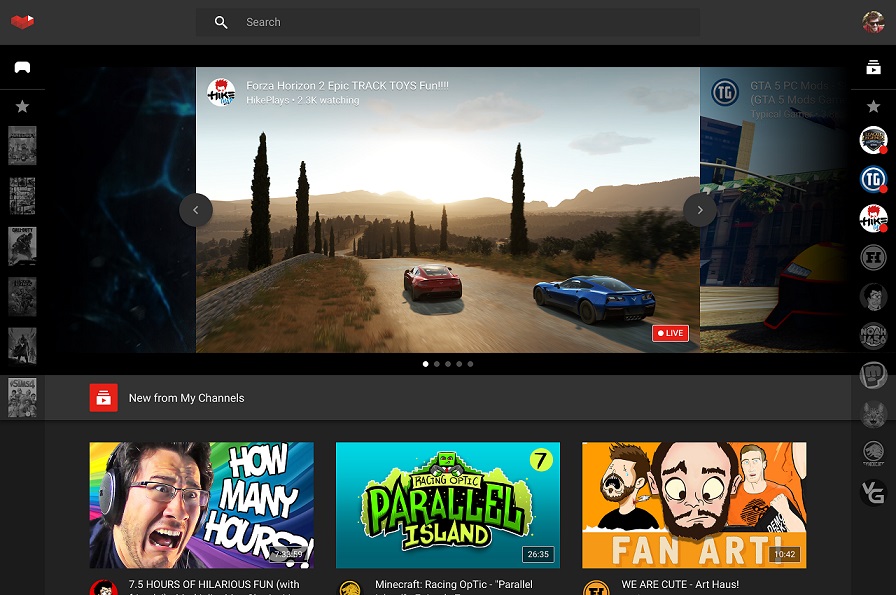 With a new interface pushing trending videos and live-streaming, the Google-owned giant is now poised as an alternative to Twitch.

The platform, which was first announced in June, is the new home for all things gaming, from in-game play (often referred to as “let’s play” videos), gaming news, reviews — and yes, live-streaming.

Now, all videos uploaded to YouTube that fall into the “gaming” category will be pushed to YouTube Gaming automatically.

YouTube users don’t need a second account to access YouTube Gaming and can still watch gaming-related videos on the traditional platform if they please, but if they watch through YouTube Gaming, they’ll experience a different interface that helps push trending game videos and live streams to the spotlight. Live streams also have a chat option.

Gaming channels also exist simultaneously on both YouTube and YouTube Gaming, meaning gamers don’t have to worry about building up their follower count or transferring over videos. It will be available on Android and iOS in weeks to come, and can also be fed to a TV set via the Google Chromecast.

Gaming has been YouTube’s most popular vertical for years — videos in the genre draw more views than any other pieces of original content (gaming is only out-performed by music videos and movie trailers combined). In 2014, gaming videos of all kinds boasted more than 75 billion views in total, according to the YouTube 2015 Lookbook.

One of the biggest games that attracts online viewers is Minecraft (more than 13 billion views in 2014). YouTubers in the Minecraft genre like Mitchell Hughes (who vlogs under the moniker Bajan Canadian) have not only generated decent revenue from advertising on their videos, they’ve been able to use the videos to promote other ventures — for Hughes, his “full-time” income comes from the server he and several friends run, as well as a store for in-game Minecraft upgrades.

Perhaps the biggest success story to come out of YouTube’s gaming sector is Felix Kjellberg, better known as PewDiePie — who was prompted to respond to criticism for his reported $7.4-million-dollar earnings in 2014. Kjellberg currently has more than 35 million subscribers.

But despite the ubiquity of gaming on YouTube, it’s not the only platform in the game-streaming game.

Twitch first launched in 2011, but gained widespread recognition in February 2014 when a group of gamers used the platform to broadcast a collaborative game of Pokemon. Later that year, Twitch was purchased by Amazon for $940 million, following rumors that Google had made a bid to buy the service. In 2014, Twitch saw an average of 100 million unique monthly viewers, according to its own statistics.

Though those numbers seem to pale in comparison to YouTube, it has still made moves to remain competitive — like recently upgrading its streaming speed to 60 frames per second to compete with Twitch’s quality.