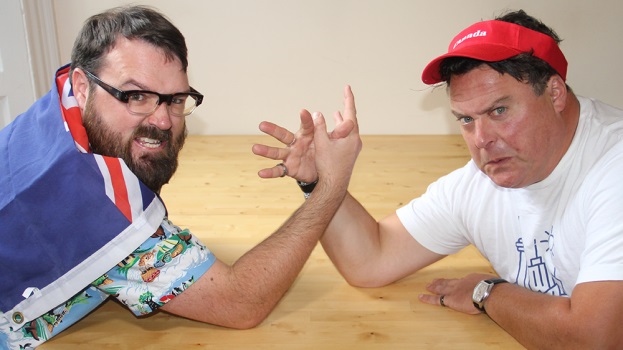 Producers iThentic and Thedownlowconcept have big plans for the multi-platform series The Nations, set to premiere on CBC Punchline.

The Nations, a multi-platform digital comedy/reality series produced by Toronto’s iThentic and Auckland, New Zealand’s Thedownlowconcept, will premiere on CBC Punchline this fall.

The project came out of the Canada-New Zealand Digital Media Fund, a coproduction fund established earlier this year between the CMF and New Zealand funding body NZ On Air. The Nations is one of five projects to have received financing via this fund. Financing for the project also came from TV New Zealand, CBC, iThentic and thedownlowconcept.

The video episodes will see the comedians partaking in weird and wild contests to decide which nation is superior, with production beginning in Toronto on Sept. 3 and shifting to Auckland on Sept. 12. The direction of the video series will be heavily influenced by user engagement, with some of the show’s production taking place in locations and settings suggested by users through social media.

As well as the video episodes, The Nations website launched last week where users can take quizzes on topics such as pop culture, history, geography and wildlife that are specific to Canada and New Zealand. Users of the website will also be able to submit challenge and contest ideas and tweet or post trivia questions to the comedians.

Lisa Baylin, VP content, iThentic, said the project is a natural progression for the company. “We’ve been doing a lot of productions in scripted, and this is a way for us to blend our storytelling skills and take it into a new arena – that being reality lifestyle. So I think it’s a very natural fit.”

Baylin added that iThentic and thedownlowconcept see global potential for the series. “Our goal is to be a format, and we call this round one – that’s in our eyesight. We’d love to either keep it as a digital property or extend it on to traditional, if there’s a possibility for a broadcaster to take it on, or a brand, and take it to the next level.”