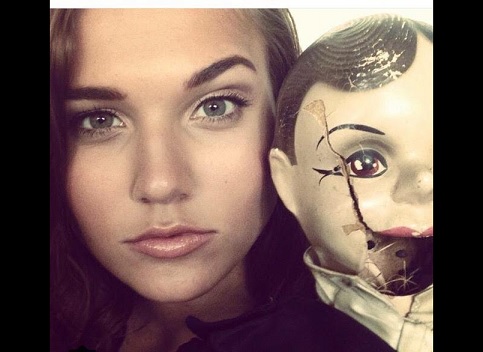 The creator behind The Haunting of Sunshine Girl says she considers YouTube her stepping stone, but not her final destination.

Paige McKenzie thinks of her current success on YouTube as her “college years.”

The 21-year-old digital creator, writer and actor from Portland, OR, considered going off to post-secondary, and was even accepted into two arts programs after high school, but ultimately decided to defer for a year while she was still invested in her YouTube project.

That one year turned into three, with McKenzie’s scripted series, The Haunting of Sunshine Girl, expanding during that time into a quirky network with more than 300,000 subscribers. There, she collaborates with and posts work from other YouTubers whose subjects range from ghosts and zombies to everyday vlogging.

Now, she told StreamDaily, “instead of going to college, I go to things like VidCon and book signings.”

McKenzie’s online business keeps her busy. This past March, the young entrepreneur released her first book based on The Haunting of Sunshine Girl (with sequels to come) and production for a linear TV show is soon to start. She’s also got a comic book and merchandise line.

McKenzie, who is part of the BBTV MCN, speaks in a chipper, positive voice — and definitely comes off as more “sunshine” than “haunted” — which begs the question: why is she so into such creepy subject matter?

For one thing, ghosts are just plain fun.

“A lot of people can relate to enjoying ghost stories or enjoying the mystery,” McKenzie said. Plus, she said, ghosts and the supernatural were already hot topics online, which McKenzie said boosted her chances of being noticed.

“Five years ago, when we started, ghosts were the number-two search on YouTube,” she said. (McKenzie said she had no interest in starting a series based on the most searched topic at the time, hip-hop artist Li’l Wayne).

Though she loves spooky material, she also said some of her youngest fans are under 10 years old, and she strives to be a positive role model to those girls by expanding what their idea of a female YouTuber can be.

“If people can realize you don’t have to be sexy or crude to still be successful on YouTube, then I feel like I’ve done my job,” she said.

She first realized the impact she had on young fans when she encountered a bubbly young fan on her recent book tour. “She had all kinds of great questions and was just flat out adorable and highly entertaining,” said McKenzie. “Her mom told me later that she is virtually non-verbal in her daily life. My show has opened her up and made her brave…that is not something I ever saw coming.”

But for all that energy, McKenzie said YouTube alone isn’t making her rich. She has no doubt you can make a lot of money on the platform, but said ad revenue from her network doesn’t provide a life of luxury (BBTV could not disclose the details of any revenue sharing deals, but a rep from BBTV did say some branded content opportunities for McKenzie are currently in the works).

“There are some people who have really figured out YouTube and can make a lot of money,” said McKenzie. “I’m not starving, I do make money, but I’m not PewDiePie.”

But for her, YouTube isn’t the be all and end all. While some of her YouTube colleagues (like Matthew Santoro) use side projects to bring the attention back to their pages, McKenzie only ever sees herself branching out.

“I love YouTube very much. I love the immediate reaction. I love the fan interaction, but it’s definitely just a step to what’s next.”

McKenzie said she sees herself continuing to test out new series through YouTube, but she’s looking forward to exploring the linear world, as well as continuing her book series. And, she said, she may consider college in the future.