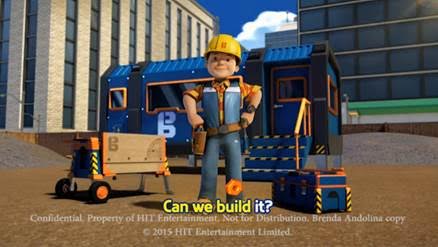 Hit Entertainment's iconic handyman is set to make his U.S. return to PBS Kids this November in an updated CGI-animated series.

Hit Entertainment’s classic character Bob the Builder has had a little work done.

The iconic handyman is set to make his U.S. return to PBS Kids this November in an updated CGI-animated series.  But fans of the show have a chance to see its new look well in advance, thanks to the launch of a new Bob the Builder U.S. YouTube channel that will stream more than 40 mini episodes featuring the revamped character.

The first of the three-minute shorts, which will all lead up to the show’s TV debut, is a sing-along to the Bob the Builder theme song “Can We Fix It?”

Produced at Hit’s U.K. headquarters, with animation from Canadian-based digital animation company Mainframe, the show features the voice talents of Lee Ingleby (Harry Potter and the Prisoner of Azkaban) as Bob, Joanne Froggatt (Downton Abbey) as Wendy, and Blake Harrison (The Inbetweeners) as Scoop.

In addition to debuting on PBS Kids, the revamped series hits U.K.-based Channel 5’s Milkshake! block this year, and it will bow in early 2016 on Super RTL (Germany) and Televisa (Mexico). The second season (52 x 11 minutes) is set for delivery in 2016, with an hour-long special following in 2017.