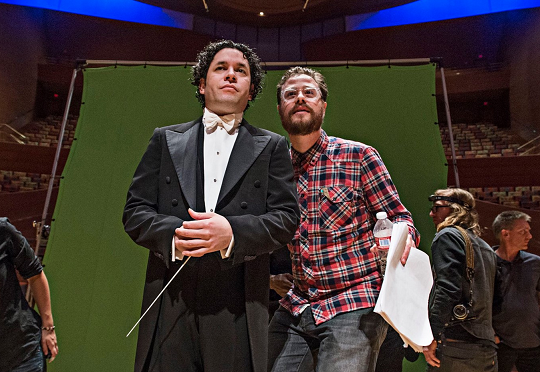 Fans can experience Beethoven's Fifth Symphony in a new way, with a VR performance captured for Oculus and Samsung devices.

The folks who typically enjoy virtual reality technology and those that support high-brow orchestral music may not have had much in common in decades past, but a new VR project by the L.A. Philharmonic could prove to be a link between the two.

Van Beethoven is a new VR experience that will tour across California at arts and cultural events throughout September and October, including the L.A. County Fair and the L.A. Korean Festival.

The performance was recorded 8 dpo on clomid and produced by Secret Location, the L.A.-based agency behind other VR experiences, including a short film based on the movie Insidious III.

The orchestral footage was captured by placing a number of 3D-optimized cameras around L.A.’s Walt Disney Concert Hall, while also capturing 360-degree sound and stitching the footage cymbalta cost together.

Dudamel said the resulting experience is intended to allow people “from all walks of life and from many different communities in Los Angeles and beyond” to enjoy the joy of music.

“I have often said music is a fundamental human right, and using this technology helps us to make this mission even stronger,” he said in a statement.

The footage will also be available for download as an app through both the Oculus and Samsung Gear VR app stores in September. The http://accutanegeneric-reviews.com/ cost has not yet been announced.

The Oculus Rift, which was bought by Facebook in 2014, isn’t available yet for retail purchase, but VR enthusiasts can buy a version meant for software developers and not consumers. Oculus has said that the rig will hit consumer markets by Q1 2016.

The VR industry is heating up, with many experts believing that 2016 will be the year VR content and technology becomes mainstream. Some believe that by 2025, VR content will be a $6 billion global industry, and that the value of VR technology such as cameras and viewing devices may bring that market as high as $60 billion.

Tech companies are jumping into both VR viewing and VR creation — Google and Nokia have released their own VR cameras and Los Angeles-based NextCore corporation recently launched Noon VR, a mobile VR viewing platform and an accompanying headset available for $89. (By comparison, the Oculus developer kit cost $350 while Samsung‘s version runs at $199).

Even YouTube is getting into the VR game. Earlier this year, YouTube began supporting 360-degree videos which could be viewed on VR devices (or through the Google Cardboard viewer, mobile or desktop). Recently, in her keynote at VidCon in July, YouTube CEO Susan Wojcicki announced YouTube would also introduce 360 degree video capabilities for advertisers, with a 360 campaign for Bud Light launching July 23.