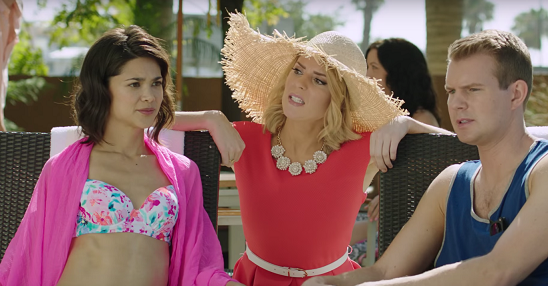 The popular YouTuber, author and public speaker is the latest digital influencer to work with the hotel chain on branded content.

The YouTube star, whose career also includes movies, live comedy tours and a bestselling book, can be seen in Marriott’s new series of videos where she “awkwardly” interrupts private moments to talk about the advantages of “being direct.”

It’s part of Marriott’s new “#Itpaystobookdirect” campaign, which encourages customers to book directly on Marriott.com. The campaign is comprised of three videos: Interview (below), The Proposal and Scenic Route.

The campaign was lead by Marriott’s in-house content studio, in partnership with the digital production studio Above Average. It’s the first partnership between the two companies.

Marriott has collaborated with other YouTubers in the past on campaigns. In July, the company announced a new branded series, Do  Disturb, starring YouTube comedian Taryn Southern.

David Beebe, VP, global and creative content marketing at Marriott International, said in an interview with StreamDaily that YouTubers and online influencers help to capture the attention of millennial audiences, which Marriott is currently trying to attract.

“(YouTubers) are the people they’re engaging with,” said Beebe, who also said that those audiences want stories rather than companies simply talking up their own products.

“Brands really need to stop talking about themselves first and provide value for the viewers first,” said Beebe. “When you partner with influencers like Grace, they create stories for us.”

Helbig, who boasts more than 2.5 million subscribers on YouTube, has been almost impossible to ignore as a YouTuber. In April, she became one of the new faces of YouTube’s creator-centred ad campaign (along with Hannah Hart and Dude Perfect). Fans can expect to see her, along with Hart, starring in Legendary Digital and Fullscreen’s upcoming series, Electra Woman and Dyna Girl.

But beyond YouTube, Helbig has made the leap to feature films like Camp Takota, a late-night talk show on E! (The Grace Helbig Show, which concluded its first season in June, but has not yet been renewed for a second season).  In 2014, she penned the book Grace’s Guide: The Art of Pretending to be a Grown-Up, which made the New York Times’ bestsellers list.