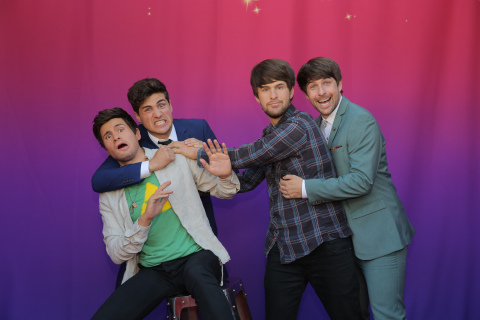 Defy’s Keith Richman on Smosh, success and the future of digital

The MCN's president says young viewers aren't just flirting with digital media anymore. They are wedded to the platforms.

Defy Media president Keith Richman (pictured below, right) is eager to talk about digital content and his company’s leading place within that world, but that’s proving a difficult job in a room full of distractions. Just behind him in the Defy lounge at VidCon, a woman is seated on a stool with a PlayStation VR headset covering her eyes. The images she’s seeing, invisible to the rest of the world, are causing her to alternately burst out laughing and swat her hands helplessly at the air, as though she’s shooing away a hilarious giant fly. 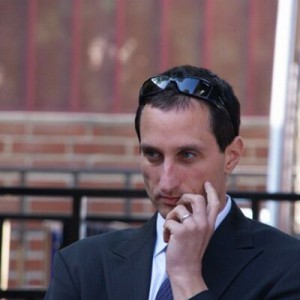 And then there’s The Smosh Movie. The film features YouTubers Anthony Padilla and Ian Hecox (pictured above with their wax look-a-likes by Madame Tussauds), whose comedic channel on YouTube (21 million subscribers and 4.6 billion views), is the crown jewel in Defy’s multi-channel network. The movie, which was jointly financed by AwesomenessTV, is the company’s first-ever attempt at long-form content.
It was released on iTunes just hours earlier and at least half of Richman’s attention is on watching how fast it’s climbing in the charts.

“The movie is important,” he says amid a flurry of excitement prompted when the movie becomes the number-one most downloaded film in Canada, then, moments later, the number-one comedy in the U.S.

“It’s a big step for us as a company and, to some degree, an even bigger step for the industry because it is representative of a lot that has happened in the last couple of years.”

Notably, Richman sees the film, and the magnetism of its two stars, as incontrovertible proof that people – particularly the coveted Gen Z and Millennial crowd — aren’t flirting with digital platforms anymore. They are wedded to the medium.

That’s all good news to Defy, which, with 55 million total subscribers on YouTube and 500 million monthly video views, already has a firm grip on the digital market. “Our ability to expand and invest in great programming is only increasing, which is awesome. It’s a great place to be,” says Richman, who, despite all the action, sat down with StreamDaily to talk about Defy’s success and where he thinks the company, and the industry, is heading. The following Q&A is an edited transcript of that conversation.

What made you think you could put out a movie when no one else in digital had really done it?

We thought we could do it because, at the end of the day, Smosh was, at the time, (and they’ve grown so significantly since then) at 20 million fans that love watching (digital) video and they were clamoring for more. All we needed to do was find the right vehicle for them.

In the two years since you started planning the film to the time of its release this summer, what have you learned?

We’ll know more of that in a couple of weeks. Right now it all looks great. We are climbing in the iTunes charts, so I think we learned that we’re really good at making content and it doesn’t matter if it is short form or long form. The skill set that we’ve learned is not based on the length of time. It’s based on knowing an audience really well and we continue to believe that no one knows this youth audience as well as we do. Not only do we spend a lot of time and money researching it (Defy creates weekly analytical reports on its viewers), we combine that with actual knowledge and information from stuff that has worked, strong pattern recognition, and then we have great ability to look through the data. When you are doing a half billion views a month on just stuff that we make alone, it gives you pretty good insight to see what’s working, what’s not and what people care about. All of that factors into us being able to capture the Zeitgeist.

Tell me more about what you’ve learned about Defy’s audience and what young viewers want?

We’ve learned a ton, obviously. People really look at this content because they find it to be way more relevant and relatable than traditional media. The content that traditional media is putting out doesn’t speak to them nearly as effectively, and that is true whether it’s the talent or the programming itself. It’s my personal theory that that is not surprising given the way it’s developed. It takes a year to get a TV show made and there are plenty of people involved in that process, probably too many people. When you flash forward a year, people’s interests have changed a lot. We are able to stay relevant. We have very quick development cycles. We turn things very quickly.

What’s on the horizon?

We are an owner of distribution channels and so we need to program those channels. You would be shocked if you turned on Fox or NBC and there was nothing there. We have a continual need to find new and fresh programming for our audiences, but the stress and pressure behind that is not nearly what it once was because our infrastructure is so strong that no one is better positioned to do that. It’s really scary when you make a show and you’re not sure if you can get anyone to watch it. That’s pretty stressful. But we’ve got 60 million subscribers, 80 million people go to our websites, and we’ve got over 20 million downloads of our apps. There’s a continuous pressure to come up with stuff that is great. But that is the fun part of it.

But you still have to stay on top of where trends are going, right?

That’s true for anybody dealing with people 12 to 24 (years old). I don’t know if that is specific to us. In a lot of ways we are so much better off than retail or traditional media that has to do that years in advance and make some bets.

What are the hot trends for 2015, from a content standpoint?

It’s “What do people care about?” and “How are they feeling and how do they feel about themselves?.” Body positivity is a really important (category), as evidenced a couple of weeks ago when a beauty blogger put a video of herself out there without any makeup on, and it did really well. In the beauty and entertainment space, it is “body positive,” but generally positivity as a whole. One of the biggest programs we had last year was Prank it FWD (on Defy’s Break channel), which we brought back because people want to see good things happen. Negativity has diminished a lot.

What about the notion of 3D or VR. How fast are creators adapting to the technology?

I think this next year will be the year that VR will really emerge. YouTube is focused on it. Facebook is focused on it. For the average creator, though, it is just one more thing they are going to have to worry about. That’s another reason we are in a really good position as a company because we can help people focus on that and buy the equipment, which is expensive, and figure out how to create wonderful content within the ecosystem.

Can we expect some big announcements out of Defy over the next few weeks or months?

I hope so, but if anything was ready, we would have announced it.

CORRECTION: This story first appeared with incorrect data regarding Defy’s monthly video views and total subscriber base. The information has been updated to reflect the accurate numbers supplied by the company. StreamDaily regrets the error.