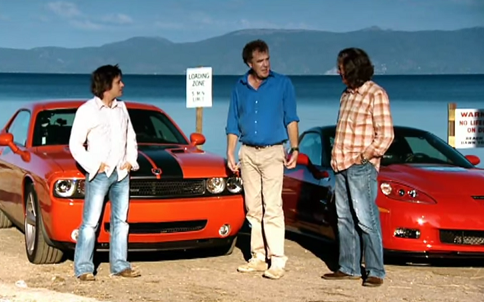 Former Top Gear team is back in business

After their dramatic exit from the BBC, Jeremy Clarkson, James May and Richard Hammond will ride again on Amazon Instant Video.

Richard Hammond is very excited about his new job.

The Tweet (and thousands more from fans) comes as the former Top Gear host, along with his co-stars Jeremy Clarkson and James May, shared the news that they are ready to once again hop back in front of the cameras after their less-than-amicable split from BBC earlier this year.

The trio, whose on-air antics helped to make Top Gear one of the most-watched television show in the world, confirmed they’ve signed a deal with Amazon to create and distribute a new car show. It will stream on Amazon Instant Video.

Amazon has confirmed the first episode of the yet-to-be-named series will go into production shortly. The series will begin to roll out for Amazon Prime customers in early 2016.  No details on the number of episodes were released at press time.

Hammond and May, along with veteran Top Gear producer Andy Wilman, walked away from their roles with the BBC’s Top Gear in March following Clarkson’s high-profile dismissal for allegedly physically assaulting a crew member.

The firing sparked a massive outcry from fans, with a petition supported by more than one million signatures delivered to the BBC demanding it reinstate Clarkson. That didn’t happen.  Instead, Top Gear has returned to BBC with British radio host Chris Evans at the helm.

Now Clarkson, May, Hammond and Wilman will instead join the ranks of Amazon originals. Amazon’s video service is available in the U.S., U.K, Germany, Japan and Australia.

“I feel like I’ve climbed out of a bi-plane and into a spaceship,” said Clarkson in a statement on joining Amazon.

Jay Marine, VP of Amazon Instant Video EU said his own statement that the dedication of Top Gear‘s following (the three former hosts collectively boast 10.18 million followers on Twitter) was what lead them to fight for the rights to the show.

“Customers told us they wanted to see the team back on screen, and we are excited to make that happen,” he said.

Several sources, including the Wall Street Journal, have alleged that there was a bidding war for the trio’s new show between Amazon and Netflix.

Top Gear has often been cited as the most popular series in the world, winning a Guinness World Record for being watched in the most territories. Needless to say, people are excited about the trio’s impending return.

@BBC_TopGear your loss is the world’s gain… Though he may act like an arse at times, the show (including him) made everyone wealthy/famous