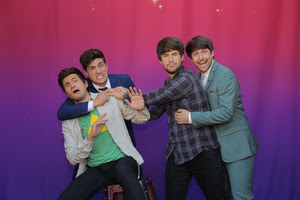 Ian Hecox and Anthony Padilla of Smosh are the first online creators to be depicted in the famed museum.

The replicated duo — along with the real one — made a red carpet appearance at the world premiere of Smosh: The Movie at the Village Theatre in Westwood, CA.

Becoming the very first digital stars to be preserved in paraffin is just the latest in a string of accomplishments for Padilla and Hecox, whose numerous YouTube channels are supported by 30 million subscribers.

“What an honor it is to be recognized and chosen for Madame Tussauds first YouTube wax figures in their 250 year history,” Padilla and Hecox waxed eloquently in a statement. “We’re excited to bring them along to VidCon and can’t think of a more fitting venue to show off our wax selves!”

The “wax selves” of the Smosh duo will appear at VidCon’s Defy Media suite and the Viewseum in Anaheim from July 23 to 25 before spending three month stays at various Madame Tussaud’s locations across the U.S., commencing with San Francisco and then relocating to New York, Hollywood, Orlando, Las Vegas and Washington D.C.

In the meantime, the Lionsgate comedy will be released July 24 in North America and two days later in the U.K.