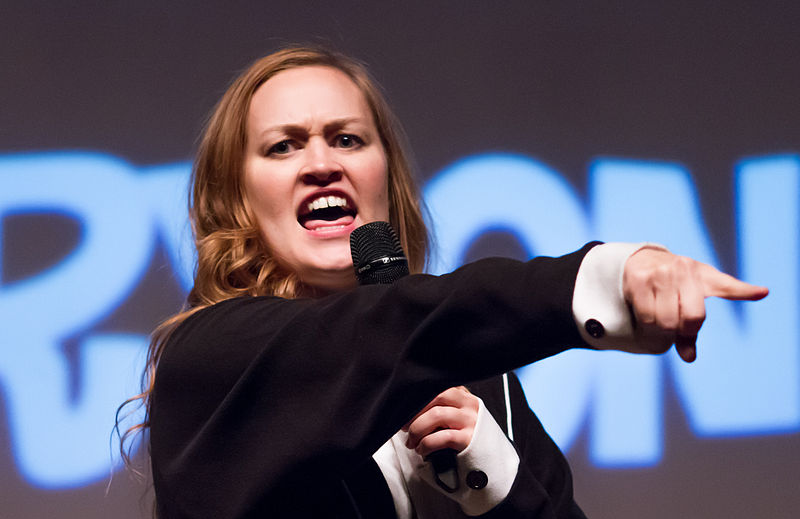 Beyond YouTube: Mamrie Hart on books, movies and earning her keep

The 31-year-old comedian says YouTubers deserve every penny they get (yes, even PewDiePie).

At first glance, Mamrie Hart‘s journey to fame was not unlike what you might see in a movie. After graduating from college with a theatre degree, Hart moved to New York City to become a comedian and actress. She spent a few years auditioning and landing minor roles while doing stand-up.

Four years after uploading her first video to the Google-owned platform, Hart, now 31, can be found on two YouTube channels. In addition, she just wrapped up her second national tour of a live comedy show, has written a full-length motion picture, is set to star in an upcoming kids’ series by the Jim Henson Company and is the host of Condé Nast’s digital travel series #HeyUSA.

Oh, and she’s also recently penned a book, You Deserve a Drink, an autobiographical tale of her self-described “misadventures.” It’s a New York Times bestseller.

In preparation for her appearance at the 2015 VidCon in Anaheim, where she will participate both on the panel “Laughing at & with us” and in a Q&A session with her friends and frequent collaborators Grace Helbig and Hannah Hart (no relation), Hart spoke with StreamDaily on why she thinks YouTubers deserve every penny they earn and why she likes to keep so busy.

“There are certain genres on YouTube that lend themselves very well to brand integration,” said Hart, who wouldn’t reveal how much money she makes from YouTube. “A woman who likes to drink and tell dirty jokes, not so much.”

As such, she likes to keep branching out beyond her main YouTube channel, “You Deserve a Drink.”

Though it’s not brimming with brand partnerships, it’s still successful in its own right. “You Deserve a Drink” has gained almost one million subscribers over four years. The channel features Hart creating original cocktail recipes while telling jokes and interviewing guests (and, she admits, getting a little tipsy herself).

Hart, who also runs a personal vlogging channel, said she’s gotten to a point where she’s comfortable and happy with her material, and doesn’t see a need to change her style anytime soon. “It’s got a nice groove to it now. I think of that with channels like my sitcom, you know what you’re gonna get. There’s a nice structure to it.”

But Hart, who is part of the Collective Digital Studio network and repped by CAA, admits that though she’s devoted to YouTube, she doesn’t like to stick to just one thing.

“For me, when I started I was also doing traditional comedy along with Grace (Helbig), and I’ve always thought of YouTube as being alongside my traditional trajectory,” she said.

She’s never left her stand-up roots, despite a busy schedule of writing, vlogging, hosting and, of course, her book release.

Hart is one of several YouTubers in the literary space. Others include PewDiePie, Matthew Santoro, Helbig and Hannah Hart.

It’s a smart business move, said Hart, adding, “I think it’s evident that people are trying to add as many things as possible to their repertoires.”

Maybe next year, she said, the trend will see digital stars writing and starring in movies, or bringing more long-form content on YouTube.

In that, she’s already ahead of the curve. Her movie, Camp Takota, starring Helbig with the two Harts in supporting roles, was released on its own website and on iTunes in February 2014, and was screened at TIFF’s New Wave Film Fest that same month. It was one of the first high-profile film projects for native digital talent, and according to a press release for Hart, was one of the top 15 most downloaded independent movies on iTunes in 2014.

Hart’s goal is to keep herself as versatile as possible.

“I see myself putting out more books,” said Hart. “I’d like to see myself writing and starring in more movies — really just using this YouTube platform to pursue this dream I’ve had since I was little.”

Pursuing that dream takes a lot of hard work, said Hart, and she’s not about to let anyone tell her she (or any other creator) hasn’t earned the money they make. With the recent dust-up around PewDiePie’s reported earnings, she’s quite adamant that YouTubers who make big money deserve what they get.

(PewDiePie, real name Felix Kjellberg, was reported to pull in $7.4 million last year, which prompted the creator to put out a video justifying those earnings.)

“A lot of people think that I sit in front of a camera, I make a drink, I tell jokes and I make money,” she said. “Behind every piece of content you see is a one-person production team.”

The work is harder than it looks, said Hart. She writes her own jokes, creates the drink recipes, does her own editing and arranges guest appearances.

But Hart doesn’t see herself ever getting tired of YouTube, even as other opportunities creep up.

“The good thing is, I’ve always wanted to do TV and movies, and YouTube lets me do that instead of spending all my time auditioning,” she said. “All entertainment is becoming more personal, and with YouTube you have (an) instant critique.”