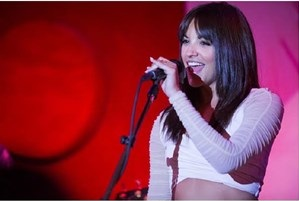 The sponsorship, with cross promotion by AOL, comes as the mobile giant continues its move into the original content space.

Verizon exec Marni Walden hinted only last month that consumers would soon see some innovative moves from the company in the form of fresh content.

Walden, EVP and president of product innovation and new business, was short on details at the time. But, with the recent announcement of Verizon as the lead media sponsor of a new dramatic series, South Beach, the company’s new focus on original programming is now becoming more clear.

South Beach, produced by Dolphin Digital Media, is a scripted show written by Brian Hurwitz (Hiding, Stranded) and directed by Joshua Caldwell (Layover, Dig). All six episodes of the pilot season are set to bow on Hulu July 29.

The series follows the story of Carmen Suarez, a gorgeous bilingual pop star played by Ana Villafañe (pictured), whose upcoming tour is at the center of an escalating, bitter rivalry between the two most powerful record labels in Miami. Revenge, passion, murder, betrayal are all strong themes.

As Verizon’s latest acquisition, AOL is also onboard as a promotional partner, and will debut exclusive content leading up to the series’ premiere, including teasers, cast interviews, and short lifestyle features showcasing Miami’s distinctive fashion, music and nightlife. The promo content was also produced by Dolphin, and will be distributed on AOL-owned sites and on the AOL On network.

A rep for Verizon said the company was interested in backing the project because of its strong themes tying it to music industry, a market (both in terms of video and music streaming) the company is looking to tap as it continues to grow its mobile reach.

In June, Walden said Verizon would launch its own “mobile-first” streaming platform, complete with original content that focuses on live music and sports. The service is expected to be unveiled this summer.

Earlier this year, the company made public its intentions to jump into the original content market with news that it had struck a deal with AwesomenessTV to create and launch two OTT channels featuring 200 hours of original programming.