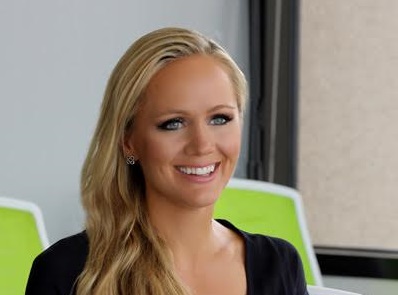 Sofia Dickens spent the early part of her career in front of the camera as a Hollywood red-carpet TV correspondent, roving ambassador for the game show Jeopardy and news anchor for the kid-friendly Channel One News, delivering daily news hits, MTV-style, into classrooms across the country.

In fact, it was in that last job where she learned an important business lesson, one that would guide her when, years later, she was looking for an effective way to promote EQtainment, an educational toy and game company she launched earlier this year.

“I just saw how, if you make (content) fun, you can really teach people anything,” said Dickens (pictured) in an interview with StreamDaily.

It’s no wonder, then, she ended up working with YouTubers Tripp Crosby and Tyler Stanton when it came time to produce the toy company’s first branded-content video.

“Poo-Poo Only Parents Say” has so far garnered 128,000 views since it landed on the Tripp and Tyler channel a week ago, with thousands more impressions notched across the duo’s social-media channels and shares across channels such as Popsugar Moms. By comparison, the same video has less than 100 views on EQtainment’s own channel.

As the title indicates, the sketch pokes fun at all the silly phrases adults somehow absorb and adopt when they become parents.

Tripp and Tyler have done several collaborations with various brands since launching their channel in 2006. But it’s the first time Dickens has worked with a YouTube influencer, whose power in reaching an increasingly influential and media-savvy millennial audience is a big — and getting bigger — draw to brands around the world looking for that kind of direct connection.

She selected the pair in part because their family-friendly comedy fits with her company’s overall messaging.

“They are very self-aware, and also very aware of comedic opportunities around them. I think they’ve really got their fingers on the pulse of what’s going on in culture today and what areas we can laugh about ourselves,” she said of the duo.

But Dickens also liked what she saw when she looked at the size of their YouTube audience (more than 166,000 subscribers and 52.6 million views). They also have a strong presence on Facebook, Instagram and Twitter. The duo didn’t just have an established fanbase, but one that is largely made up of young, working-age parents — the very demographic her company wanted to attract with its branded messaging.

That kind of direct targeting was key to her decision.

“That’s what I like about working with YouTube stars, you are able to target the demographic a bit better, and, if you do end up with a hit on your hands, the upside can be much bigger,” she said.

There is a potential downside, too. The video could end up making no impact what so ever.

“There is no perfect formula for a video to go viral,” said Dickens.

But even with that uncertainty, she said the money spent on a project like this is “less expensive than marketing dollars that you spend just spraying out information to a vast, unknown audience.”

For anyone considering a similar partnership, Dickens believes trust is essential when working with YouTube creators on branded content. While it’s critical brands go into a project with a strong vision, and sense of tone and style they want to see represented, she said licence should be given to creators to work their magic in ways that made sense to them.

Of Tripp and Tyler, she said, “We knew they had a formula for success. They have this audience that loves them and they really know what is funny.”

The “Poo-Poo” video was shot mainly outdoors and produced by the duo and their in-house team. Viewers might spot Dickens among the parents. The mom of three stepped back in front of the camera for a cameo role.