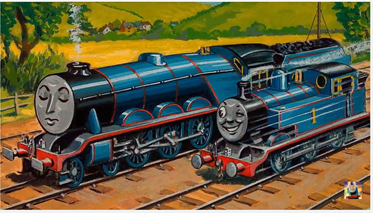 Toy maker Mattel produced the documentary in partnership with Tongal, an online site that connects creators with sponsors and projects.

Thomas the Tank Engine is 70 years old this year and generations of fans around the world who grew up with stories of the fictional stream train are all invited to celebrate the birthday with a new documentary film, Thomas & Friends.

The 30-minute doc, Seventy Years of Friendship, was directed and produced by Cassandra Chowdhury with the L.A.-based prodco Mindfruit Studios. The film launched July 14 on the Thomas & Friends YouTube channel (212,777 subscribers  and 295 million views).

Toy maker Mattel owns the rights to Thomas the Tank Engine. The company produced the documentary in partnership with Tongal, an online site that connects creators and filmmakers with funding sponsors and projects.

Chowdhury said in an email that the documentary was a low-budget production, with filmmakers (including Chowdhury, Damon Stea, co-owner of Mindfruit, as cinematographer, and Christian Hall, co-producer) setting an ambitious goal of visiting 10 countries and talking with Thomas & Friends fans in each of the destinations, as well as crew members who work on the linear series’ production.

Mindfruit won the project after seeing it posted to Tongal and making a submission.

“It was a perfect match for us because we had just shot two other travel-heavy documentaries and had that shoot-on-the-go experience,” said Chowdhury.

Mattel provided access to its Thomas-branded toys and materials, but the company did not ask for any specific content to be included in the story.

“Our goal was to tell a story about Thomas fans and the passionate people who make Thomas come alive,” said Chowdhury.

The doc includes interviews with Christopher Awdry, the son of Rev. Wilbert Awdry, an Anglican vicar and children’s author behind Thomas the Tank Engine. Christopher Awdry shares personal memories associated with the stories, and reads from the books, including from his father’s personal favorite, Thomas Comes to Breakfast. Wilbert Awdry’s first book in the Thomas series, entitled simply Thomas the Tank Engine, was published in 1946.

Chowdhury said the film was shot with a small camera package — a key difference between shooting internet-ready content versus other media.

“Usually the budgets are smaller and you have to get creative with your equipment and schedule,” she said. Despite the challenges, Chowdhury was pleased with the results.

“That is owned, in part, to my fabulous crew, and also to all of the amazing, passionate people who we worked with along the way.  It also helps that there is so much affordable professional camera equipment on the market today,” she said.

The series airs on PBS in the U.S.