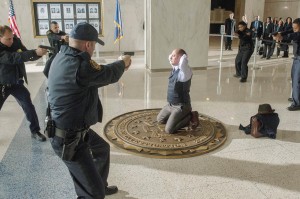 Launched in 2013, the SVOD is looking to solidify its dominant place in the French-Canadian market by growing its content library.

In a bid to solidify its dominance in the French-Canadian market, Club Illico will expand its selection of French-language content. The news comes as the SVOD signs a long-term, multi-platform deal with Sony Pictures Television Canada.

Launched by Quebecor Media in 2013, Club Illico is currently the largest French-language streaming service in Quebec with a catalogue of more than 4,000 titles.

Content added from Sony Pictures’ extensive international library will be translated into French, beginning with the American drama La liste noire (The Blacklist), starring James Spader (pictured). The series is available now on the SVOD platform and is already its most-popular streamed content, according to a company rep.

Coming up in the next few months, subscribers are promised French versions of popular films including White House Down, The Smurfs 2, Cloudy With a Chance of Meatballs 2 and The Equalizer, as well as the TV series The Night Shift (Nuits Blanches À L’Urgence).

The SVOD costs $9.99 per month, and is available on the Illico OTT platform (channel 900), via Illico.tv, and on iPad and Android tablets through the Illico app. Canadian residents in Quebec and Ontario are able to subscribe to the service.

As part of the deal, TVA Group, Quebecor’s linear distribution company, will also exclusively broadcast the French-language versions of the Sony content on free TV and basic cable.

Sony owns one of the largest content libraries in the world. The company also creates original content for its own ad-supported OTT platform, Crackle.