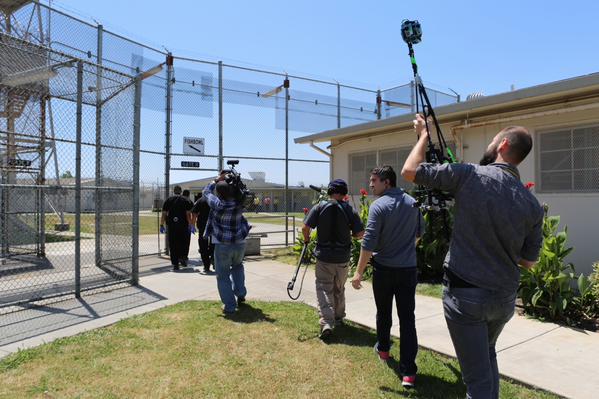 Get real: The here and now of virtual reality

From docs and surrealism to immersive narrative drama, Mike Drachkovitch explores what it will take to make VR worth the price to consumers.

Imagine waking up in a dim, lonely jail cell. Faint light filters in from somewhere in the distance. Ahead of you is a dark cement wall. You turn your head and see the bars, a guard pacing by, glancing in to each tiny room as he passes. In the distance, you hear the shouts of fellow inmates. You’re overwhelmed with fear and confusion.

But don’t worry: When it gets to be too much, you can take off your headset and your headphones.

You’re not in prison. You’re sitting on your couch at home.

This is not something out of the future. It is the kind of scenario that will play out on the bonus features for the MSNBC prison doc Lockup (currently filming, with no release date announced yet). The content is produced by virtual reality studio Ovrture, an affiliate of TV production company 44 Blue (which produces the Lockup TV series).

The VR content, which will be available for VR headsets such as the Oculus Rift, is intended to put viewers in the shoes of a first-time offender in a maximum security prison and offer a 360-view of the prison they’d see in the linear series.

It’s one of two VR projects Ovrture has in development. The other, for A&E’s Nightwatch series, gives viewers a 360-degree look at the lives of paramedics as they transport patients to the hospital.

Those might seem like some pretty high concepts for a platform that’s still not that widely used: VR is still making its way out of the basement, so to speak, and most at-home viewing devices aren’t cheap. The content can also be difficult to create — and even those in the industry agree that getting VR into the mainstream is going to be a bumpy ride.

But Ovrture founder and CEO Mike Drachkovitch believes he’s found the formula that will thrust VR into living rooms around the world.

“I think a key ingredient to mass adoption will be the next wave of content and a more mature distribution market,” he said in an interview with StreamDaily.

In Drachkovitch’s opinion, the desire for that kind of quality content will be what motivates people to spend several hundred dollars on a viewing headset.

For him, one of the most compelling factors of virtual reality is that one-of-a-kind, real-time element.

“Introducing real-time structure into a narrative has far much more potential to be compelling when there’s 360 degrees to view,” he said.

There’s plenty of VR content in existence that does not feature a dramatic narrative. In late 2014, the wildlife-focused documentary Conquest of the Skies, fronted by Sir David Attenborough, was created specifically for the Oculus Rift VR headset, as was Zero Point, a documentary that focused on the VR industry itself. Adult Swim has also created its Virtual Brainload short, an animated VR experience with surrealist elements.

But Drachkovitch believes the best content is authentic and character-driven. More narrative and immersive experiences like Nightwatch and Lockup will keep viewers interested in the long-term, not just for the duration of a single show.

“The goal is not to just attract people to VR, but to retain viewers,” he said. “The more compelling the content, the more sustainable it is.”

And, in Drachkovitch’s view, if you build it, they will come.

“We’re still at a very young stage of storytelling techniques and distribution,” he said. “But VR is such a transformative technology, that we have the capability to tell stories that can’t be conveyed on linear TV.”

Drachkovitch estimates that by mid-2016, virtual reality will be considered its own industry, completely separate from the film and TV industry.

This is Part 3 of a series by StreamDaily on the virtual reality industry. Read Part 1 and Part 2 here.