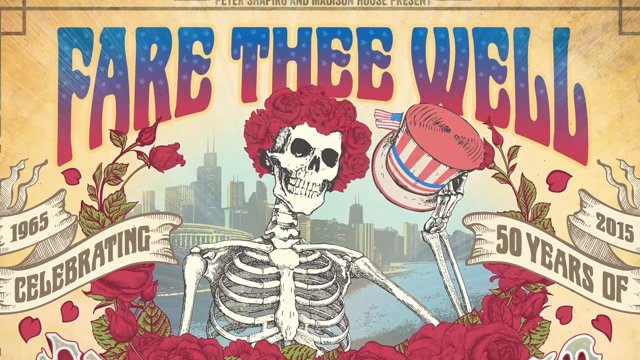 Billed as "Fare Thee Well: Celebrating 50 Years of Grateful Dead," the five concerts will be available live on YouTube for up to $29.95 per show.

Back in March, the New York Times reported that resellers were asking for as much as six figures for tickets to the Grateful Dead’s final shows, billed as “Fare Thee Well: Celebrating 50 Years of Grateful Dead.” Prices have fallen considerably since then, but for those unwilling or an unable to make the trek to the venues, there is another  way to experience the seminal San Francisco band live in concert one last time, albeit minus the smell of pot smoke and patchouli oil.

The shows will be available to stream on almost any YouTube connected device, including Android, iOS, Chromecast, Apple TV, Samsung and Panasonic Smart TVs, Xbox360, Xbox One, PS3, PS4, and WiiU. The webcast will be encoded by MLBAM‘s live streaming video technology through an exclusive partnership with live event video specialists Live Alliance. The concerts will also be available via VOD for 30 days after each performance.

The final three shows in Chicago will also be shown in nearly 250 movie theaters around the U.S. through Fathom Events‘ Digital Broadcast Network and made available via pay-per-view on satellite and cable systems.

The shows will feature the four surviving members of the Grateful Dead — Mickey Hart, Bill Kreutzmann, Phil Lesh and Bob Weir. They will take place nearly 20 years to the day of their last concert with Jerry Garcia, the band’s lead guitarist, and co-lead vocalist (with Weir), who died on Aug. 9, 1995, at the age of 53. The band will be joined by Phish frontman Trey Anastasio (guitar), Jeff Chimenti (keyboards) and Bruce Hornsby (piano).