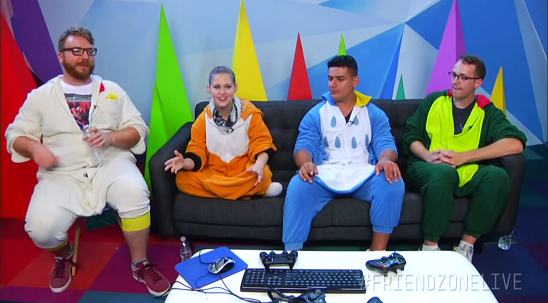 Viewers will get long-form original series like Friend Zone, pop-culture commentary and live-event programming on the new Polaris+.

OTT service Sling TV has launched a new channel as part of its core “Best of Live TV” package.

Polaris is known for original shows such as Fast Facts, Bad Dubs, The Gauntlet and Table Flip.

In a blog post by Sling staff announcing the launch, the channel will contain long-form versions of original content from Polaris, including the series Friend Zone (pictured).

Friend Zone (which appears on Polaris’s YouTube channel) is hosted by YouTuber Brooke “Dodger” Lawson (pictured second from left), who boasts more than 890,000 subscribers between her gaming and vlog channels. The show features Dodger and her friends gaming, conversing and answering fan’s questions.

The Polaris+ channel will be available in a linear format, with shows also available on demand through the Sling TV “three day replay” feature, which allows users to watch content on-demand up to three days after its initial airing.

Earlier this year, Sling, which is owned by Dish Network, acquired the rights to live and VOD content from Univision’s sports, entertainment and news portfolios. It first struck a deal with Maker Studios in January to include content from Maker’s YouTube channels (and its 55,000 content creators) in Sling’s core package.

The “Best of Live TV” package costs $20 monthly and can be streamed through connected TV devices such as Apple TV, Chromecast and Roku, as well as on XBox One, Android and iOS devices.