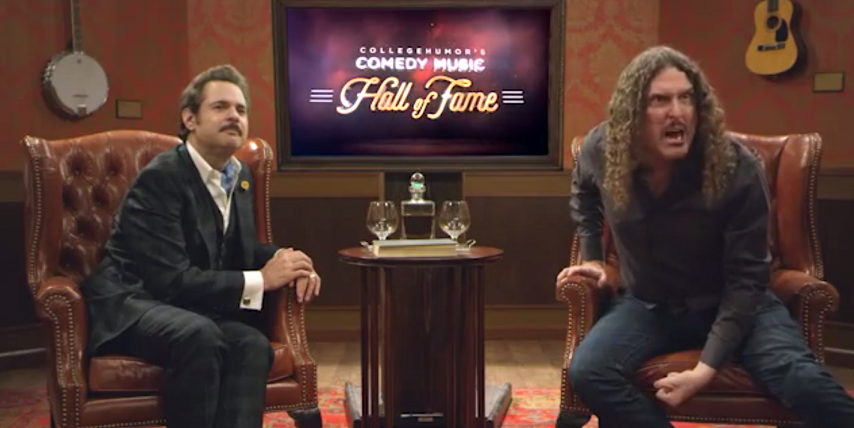 The show will feature performances and appearances from musical comedy legends including "Weird Al" Yankovic and Tenacious D.

The first-ever CollegeHumor Comedy Music Hall of Fame special will air June 19, both on television (IFC) and the online site, CollegeHumor.com.

The hour-long special will be hosted by comedian Paul Tompkins (pictured left) and feature interviews and performances by musical comedy superstars “Weird Al” Yankovic (pictured right), Tenacious D and Rachel Bloom, among others. Yankovic will be inducted into the Hall of Fame at the event.

The event will also feature new, exclusive videos from up-and-coming performers in the genre.

Following the broadcast, CollegeHumor will release extra videos including sketches, performances and exclusive content not seen on the initial broadcast.

“Comedy music is as much a part of CollegeHumor’s DNA as any other content we’ve produced,” said Shane Rahmani, GM of CollegeHumor, in a statement. “The genre has exploded in popularity.”

The special is produced by Big Breakfast, the production team responsible for CollegeHumor Originals, the site’s line of original online content (where former Parks and Recreation star Aubrey Plaza got her start).

It’s CollegeHumor’s first stab at an awards show of any kind, and is described by Electus, the company that owns CollegeHumor, as an opportunity to parody traditional award shows.

Last week, restaurant chain Subway announced it would step in as a show sponsor.

CollegeHumor released the first trailer for the event on June 15.