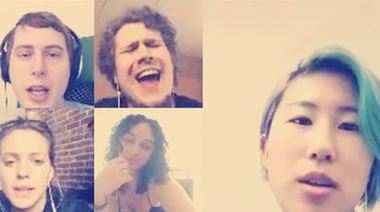 Smule wants to teach the world to sing

To Jeffrey Smith, the co-founder and CEO of Smule, the group video option added last week to the company’s Sing! Karaoke app is more than just a fun new feature. It’s akin to a virtual realization of the 1971 “I’d Like to Teach the World to Sing” Coca-Cola commercial featured in the final episode of Mad Men.

“We’re trying to build a social network around music performance, and we don’t think anyone’s done that before,” Smith told StreamDaily. “That’s true because any social network requires content creation, and (with) most music (sites) you’re just consuming what someone’s already created and uploaded. Pandora and Spotify are fantastic services, but not social networks, per se, because you don’t have this balance between user-generated content and a community engaging and listening to that content.”

Users record a song with the Sing! app using their smartphone’s microphone and built-in camera, then enable “group video” (currently only available for iOS devices). They can invite friends to record their own vocal performances on video, or make it public, opening it up to contributions from Smule’s 26.7 million users around the globe. Analyzing each singer’s individual audio and the dynamics of the underlying song, the app highlights different performances and weaves them together into a unified, group music video.

“On YouTube, it’s really a one-way street for the most part,” Smith said. “I can like it. I can comment on it. But, as a user, I’m not going to do anything with that video other than people are going to comment on it.”

Users can upload their own backing tracks to sing along with or use one of the 1,300-plus provided by Smule for hit songs such as “Stay” by Rihanna or “Thinking Out Loud” by Ed Sheeran.

“We have contracts with 800 publishers worldwide,” said Smith. “We pay the license fees, and it’s a growing source of revenue for the music industry. And if you wrote it, we’ll pay you a royalty. On a typical day our community will sing or play about 12 or 13 million songs, so there’s quite a bit of scale.”

Smith was a working on his PhD in music at Stanford when he co-founded Smule in 2008 with an assistant professor at the university, Ge Wang. (Wang departed the company in 2013 to focus on his academic work.) Smith returned to school in 2005 after stepping down as CEO of Tumbleweed Communications, a secure messaging and file transfer solutions company he co-founded in 1995.

Smule’s goal was to create mobile applications that make it easier for people to make music. In November of that year, it released its first app, Ocarina, which enables users to play their smart phones like ancient wind instrument by blowing into the microphone. The company followed with apps such as Leaf Trombone (now discontinued), Magic Piano, AutoRap and I Am T-Pain, the latter of which was one of the first apps to include an auto-tune function.

Consumers have responded favorably to Smith’s vision. In 2014, the company earned $40 million in revenue. (The company’s revenue comes 90% from subscription and 10% from advertising.) Earlier this year, it raised $38 million in equity funding led by Adam Street Partners, to be used to accelerate growth and invest in research and development.

“Our advertising revenue model is a user can subscribe ($8 per month for Sing!) or they can watch ads to earn credits to unlock songs,” said Jeannie Yang, Smule’s chief product and design officer. “You can always join for free. It’s only if you want to create. So if Jeff wants to create his version of The Doors song, he has to be a subscriber to unlock the song. If I find him, I can just join him for free, because I’m adding to it. Then we have a duet that the both of us own.”

Smule is headquarted in San Francisco, and has a single employee in its Los Angeles office, Kevin Carson. As VP of artist and industry relations, Carson works on securing music licenses and making deals with artists to contribute video tracks, including Jessie J, who contributed a performance of “Flashlight” from movie Pitch Perfect 2.

“We’d love to see some of the members of our community succeed, have original content on our network, then drop it into iTunes and selling it, and signing with a label and building their career,” Smith said.