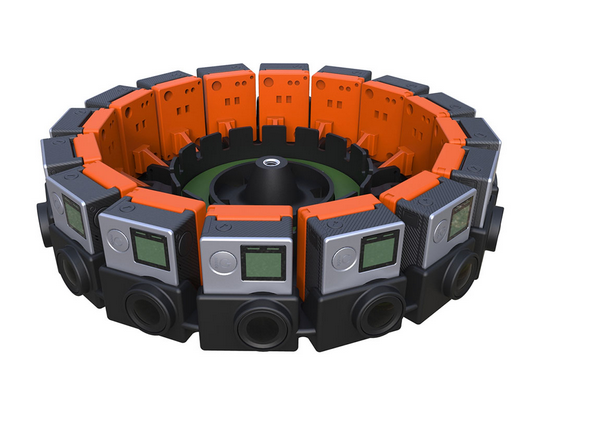 Google and GoPro jump into the 360-camera game

The new system will integrate up to 16 cameras to create virtual reality content playable on YouTube and through the Google Cardboard device.

Google is joining the world of 360 video cameras.

The digital giant and GoPro are teaming up to launch Google Jump — a new platform that allows video users to shoot 360-degree footage, using up to 16 cameras.

The news was made public at Google’s annual I/O keynote on May 28, held in San Francisco.

Via livestream, Clay Bavor, Google VP of product management, said Jump includes a system that is comprised of three parts: a specialized rig (or array) that holds the cameras, an assembler to convert the images into 360 video, and a player.

“You can make the array out of basically any material,” Bavor said. “We made one out of 3D-printed plastic, machine metal, and for good measure, we made one out of cardboard. Critical is the actual geometry.”

The Cardboard rig’s precise shape and focal lenses combines with specialized apps which split and distort the displayed content for each eye, creating the impression of a stereoscopic 3D view.

Now Google is aiming to take filming for VR mainstream. Jump takes it part way there. To create true VR content requires the capture of not only 360 video, but also 360 sound and some advanced 3D production work on a program such as After Effects.

“What we want to do is share what we’ve learned with everyone,” said Bavor. “So, just like we did with Cardboard, we’re going to be opening up the camera geometry with plans available to everyone. Anyone who’s motivated will be able to build a Jump-ready camera.”

According to Bavor, the videos shot on the Jump rig will be playable on YouTube.

“If you want to experience VR video, all you need is the YouTube app, your smartphone and some cardboard,” he said.

Bavor also announced GoPro’s plans to release its own version of a rig featuring 16 of its portable cameras. A rig of 16 GoPros Hero 4s, which cost $500 each, would have a value of about $8,000.

Personal 360 cameras have already made their way to the market, however. The Bublcam, a spherical camera created by the Toronto-based Bubl Technology Inc., costs $800.

Starting this summer, the GoPro Jump array will be available to select creators worldwide. No plans have been announced yet by Google or GoPro of a wider release of the rig.