Endemol Beyond Asia launches with a local version of lifestyle network Icon, while the Disney-owned studio helps develop homegrown talent.

Endemol Shine Group is set to launch Endemol Beyond Asia in Singapore, demonstrating once again the importance of the Asian market.

It is the first regional Asian hub for the company following Endemol Shine China, led by managing director William Tan, which opened last month with offices in Beijing and China.

The key to Endemol Beyond Asia strategy is producing local versions of global digital formats, starting with Icon, the lifestyle channel launched in the U.S. and the U.K. in March by beauty guru Michelle Phan (pictured), an Asian American of Vietnamese descent. Phan has studied makeup trends in Korea, Japan, Vietnam, China and other Asian countries, and on occasion made them the subject of her YouTube tutorials.

Endemol Beyond Asia will also create new original programs and branded content for the Asian market, and focus on nurturing digital talent.

“The synergy between our core business and this new division will allow us to deliver clients premium content on all platforms,” said Fotini Paraskakis, managing director for Endemol Shine Asia, in a statement.

Christopher Smith has been appointed head of digital and branded content at Endemol Beyond Asia, reporting to Paraskakis. He joins the company from Mindshare Singapore. Earlier, he led the experiential branded content business unit Mindshare Discovery, working with MCNs across the region.

Its parent company Endemol Shine Group was formed last year as a joint venture between 21st Century Fox and Apollo Management group, combining Fox’s Shine Group with Apollo’s Endemol and Core Media Group. Its combined IP portfolio includes the shows Pop Idol (American Idol in the U.S.), Big Brother, Deal or No Deal, So You Think You Can Dance, The Biggest Loser and Wipeout, which have been franchised to create regional versions around the globe. It also produces dramatic series such as Peaky Blinders, Broadchurch and Black Mirror. 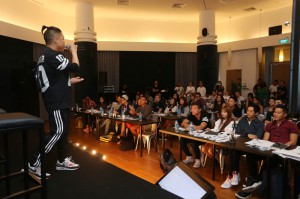 In March, the MDA  revealed plans to establish a production facility for online content creators with industry partners including Maker.