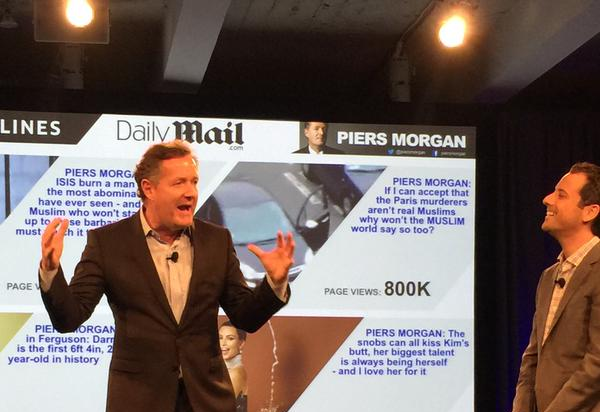 The presentation by DailyMail.com and Elite Daily on Thursday, the final day of the 2015 NewFronts, touched on a lot of wins for the global English-language publisher including partnerships, growth and a new Artist in Residency program for young filmmakers.

But it was the news website’s success in leveraging digital video content to help drive its penetration in the North American market that proved the big news of the day.

In the five years since its U.S. launch, DailyMail.com has garnered 270 million online readers globally. In January, the company acquired Elite Daily, a media start-up purchased for a reported $40 to 50 million, as a way of leveraging content in the online social sphere. Steinberg said that this acquisition has been key to DailyMail.com’s most recent success.

“Our acquisition of Elite Daily is already delivering successful results,” said Steinberg, citing more than 15 million page views in the past 30 days.

“We’re glad to just be getting started being a major player in editorial, entertainment and branded video at massive scale on every platform from Snapchat to Facebook to Twitter to Vessel,” said Steinberg. “Who knows what’s next?”

Also announced, new to DailyMail.com, is its Artists in Residency initiative, in which the company will work with up-and-coming filmmakers to create exclusive content for Elite Daily.

Its first collaborators are Rory Uphold, who will be working on her new series This is Why We’re Single, and Casey Donahue, creator of the series Disconnected.

Also presenting at the NewFronts alongside Steinberg were Piers Morgan, U.S. editor-at-large for the DailyMail.com, Nick Bell (SVP, Snapchat), YouTube stars Taryn Southern and Joe Santagato, as well as Uphold and Donahue.