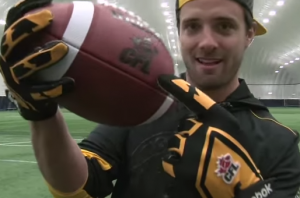 CFL touches down with Whistle Sports

The collaboration is intended to create cross-platform ad opportunities for brands looking to reach millennial audiences through options like integrating into video.

The CFL has teamed with New York-based MCN Whistle Sports in a sales and content partnership intended to expand the football league’s reach with millennials.

The partnership, announced at yesterday’s Whistle Sports’ NewFronts presentation in New York, will connect the CFL with Whistle Sports’ 14- to 34 year-old target audience.

Yesterday’s announcement was coupled with the release of a video featuring Hamilton Tiger-Cats wide receiver Andy Fantuz breaking the world record for the number of one-handed catches in 60 seconds. The video has been seen more than a quarter of a million times on Facebook in less than 24 hours.  The world record one-handed catch video is the first of a number CFL and Whistle Sports co-created videos which will be released in the build up to the new football season next month.

The collaboration will create cross-platform ad opportunities for brands looking to reach millennial audiences through options like integrating into videos, or partnering with Whistle Sports’ influencers, like Dude Perfect.

The reach and popularity of Whistle Sports and others like them is indicative of a shifting method of engaging fans, says Christina Litz, VP, broadcast and media assets at CFL.

“The old way of younger generations being introduced to football by their dads isn’t really happening anymore with TV or with sports in general,” she says.

Litz says professional sports organizations like the CFL are looking to what’s happening on YouTube and social platforms, and realizing there is a whole star system happening that traditional platforms aren’t featuring.

“The reach of Whistle Sports and others is a phenomena that no company can ignore anymore,” she says.