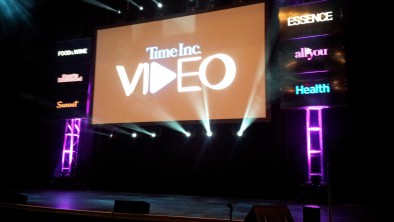 An astronaut and a bachelorette headline new original series as executives announce a new production studio.

NEW YORK – Much of the buzz at NewFronts this year is centred on the dominance of mobile and just how many eyeballs are on the video content streaming over smartphones and other devices.

The conversation topped a busy agenda at Time Inc.’s NewFronts presentation Thursday morning at the Hudson Theatre. Mark Ford, EVP of global advertising sales, said his company delivered a billion video streams in the past year through digital extensions of its powerhouse brands, including People and Sports Illustrated. Mobile was the number-one source of all that audience traffic.

Another key theme of the presentation was the momentum of the company-wide digital video initiative. Currently 22 U.S. brands are producing original video content in a variety of forms, driving a 78% growth in year-over-year video user views, according to comScore. The company has also seen significant spikes in engagement and total streams per viewer.

In addition to returning series and original programming, Time Inc. executives introduced another 11 new programs and development projects. Among them were:

It was at the 2014 NewFronts that Time Inc. announced the creation of its video distribution network, designed to add scale and diversity to advertising options. Since then, the number of distribution partners across both platforms and devices has doubled, according to the company. New partners include: Amazon (where Time Inc. video will be available on the Amazon Video Shorts pages within Amazon.com); CBS Local Digital Media and its network of 120-plus websites; Cumulus and its network of 450 U.S. station sites; Gannett, which owns and operates 120 news and information properties, including USA Today; Nexstar Broadcasting’s digital network; and Vessel Video Service, where Time Inc. was a featured launch partner.

Time Inc. also showcased a preview of its sleek new studios in the company’s new headquarters at 225 Liberty Street, NY. The studio features more than 3,000 square feet of soundstage and triples the company’s s production capabilities.

“We are doing more and moving more swiftly into the digital space,” said J.R. McCabe, Time Inc. SVP of video.

“Our goal is to constantly expand the reach and scale of our video network, first through Time Inc. digital channels and then with organic and mutually beneficial partnerships,” he said.