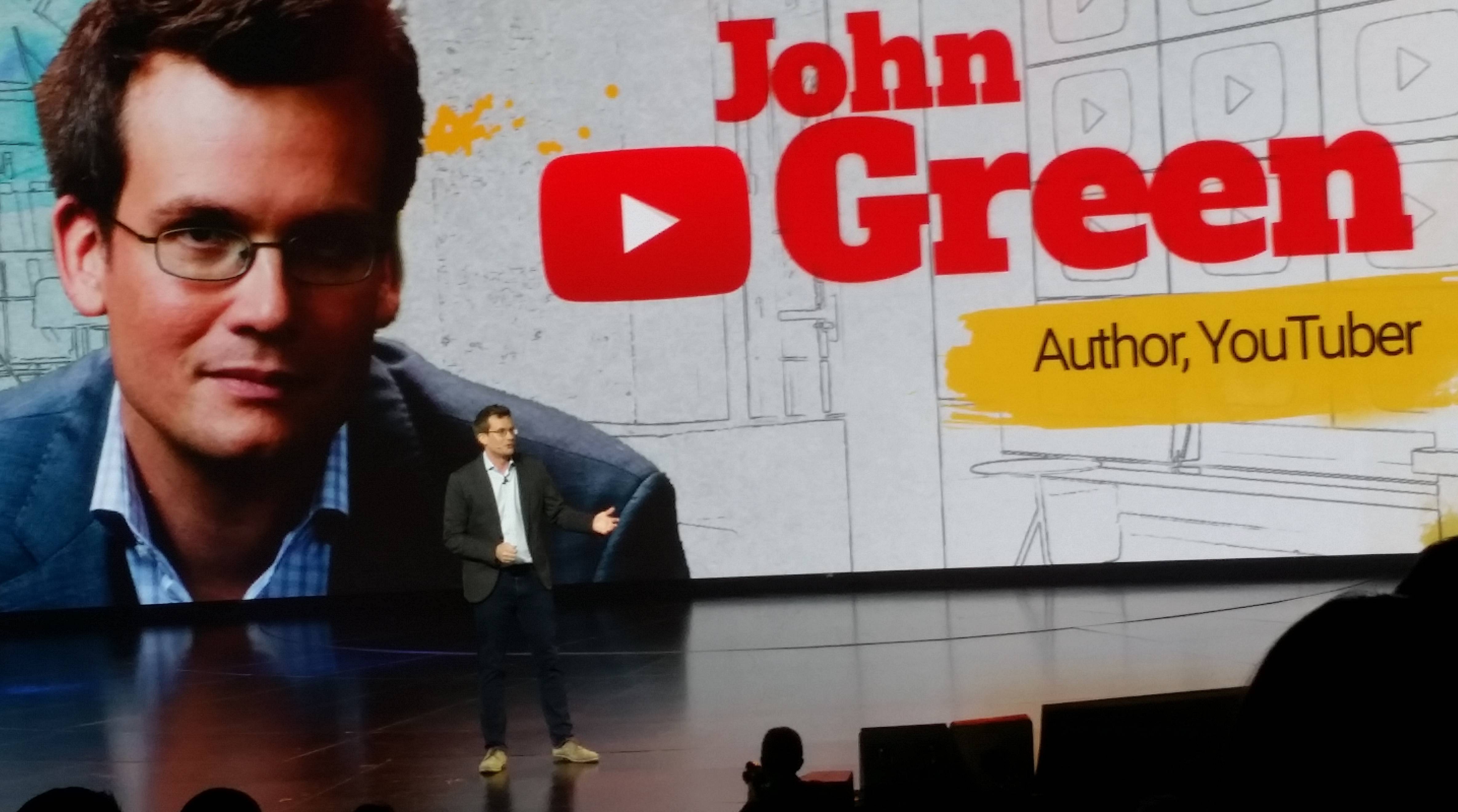 Advertisers were treated to a 10th birthday party for the platform, with testimonials from Grace Helbig, John Green and music from Bruno Mars.

NEW YORK – YouTube turned its #Brandcast presentation at Madison Square Garden into a 10th birthday celebration, complete with testimonials for the guest of honor and party music.

Unlike the AOL, Hulu, Maker and Yahoo NewFront events earlier in the week, which were heavy on new programming announcements, the Google-owned video hosting giant focused on top digital influencers – including Grace Helbig, Justine Ezarik (a.k.a iJustine) and The Fault in Our Stars author John Green (pictured) – telling stories about how YouTube has transformed their lives, both emotionally and financially. Behind them, a giant curved video screen ran the length of the stage, illustrating their tales, like the most elaborate PowerPoint presentation in the world.

Although the stories were earnest and heartfelt, they were also chock-full of hard sell targeting the ad industry crowd.

“Because people come to my channel specifically to watch videos, your ad will resonate a whole lot more because they are engaged,” Helbig said. “How do I know this? Well, in the last year, I’ve experienced first-hand how my engaged fan community drives sales,” she said, then proceeded to catalog her recent successes, including her number one New York Times best seller Grace’s Guide: The Art of Pretending to Be a Grown-up, the direct-to-digital feature Camp Takota, and her 20-city #NoFilter comedy tour with friends and fellow YouTubers Hannah Hart and Mamrie Hart (no relation).

YouTube execs also took the stage to tout the power of the platform, including Susan Wojcicki, CEO, and Robert Kyncl, head of content and business operations.

Josh Goldstine, president of worldwide marketing for Universal Pictures, was also brought on stage to explain how his company has found success using the platform for targeted marking campaigns on films such as Pitch Perfect and Unfriended.

For Unfriended, “we shifted over 60% of our entire budget to digital, with the vast majority going to YouTube,” Goldstine said. “Two weeks ago, Unfriended beat all expectations with a $16 million opening weekend, which will
make our little movie massively, massively profitable. And, for the first time in our history, online video was the number one source of information for why people showed up at the theater.” 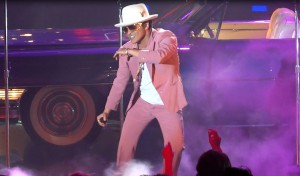 The evening opened with musical number celebrating 10 years of YouTube – which uploaded its first video on April 23, 2005 – featuring musicians Break of Reality and the Harlem Gospel Choir and live narration from Prince Ea, and closed with a raucous performance of “Uptown Funk” by Bruno Mars (pictured, right) and Mark Ronson. In between, Nate Ruess sang his hit “Nothing Without Love.”

Earlier in the evening, a YouTube Fan Meetup was held down the street at Skylight at Moynihan Station, where fans could interact with top YouTube stars Tyler Oakley, Lilly Singh, Dude Perfect and Slo Mo Guys. For the first time, fans were also invited to buy tickets to attend the Brandcast event, where their squeals could be heard emanating from the front section of the theater.