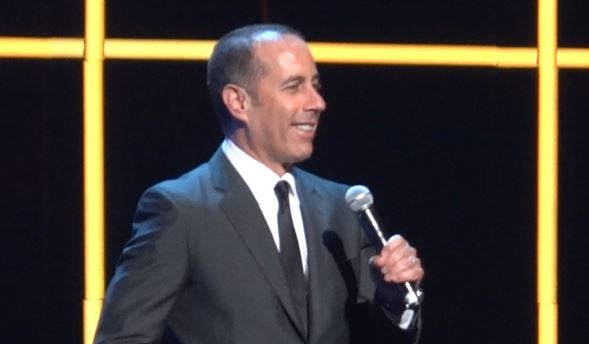 By Nick Krewen and Todd Longwell

NEW YORK – Hulu will be rolling out puffy shirts and zombies for awhile.

In its NewFronts presentation on Wednesday morning at Hammerstein Ballroom, the VOD service announced a slate of new original series. But what really caught crowd’s attention was its purchase of the exclusive streaming rights for the next several years for all nine seasons of Seinfeld, the iconic sitcom, complete with an appearance by its star, Jerry Seinfeld (pictured).

The big reveal was spoiled earlier in the day when Billy Eichner, the star of the new Hulu original series Difficult People, went off script after its executive producer Amy Poehler asked him to explain the show’s plot.

“Hold on. I just want to say one thing,” Eichner said, in mock outrage. “They spent a $130 million on Seinfeld, but once on set they told me I couldn’t get an everything bagel!”

Sony Pictures Television, which shares Seinfeld sales proceeds with Warner Bros.’ Castle Rock Entertainment and profit participants including Jerry Seinfeld, had also reportedly been shopping the show’s streaming rights to Amazon, Yahoo and Netlix, the latter which last year licensed all 10 seasons of another hit NBC show, Friends, for U.S. and Canada.

Hulu also reached a multi-year network agreement with AMC Networks for the streaming rights for future AMC, IFC, BBC America, Sundance TV and WE TV scripted comedies and dramas, including Fear The Walking Dead, the upcoming L.A.-based spinoff of the cult favorite The Walking Dead, which is shot outside of Atlanta, Georgia.

Most series in the AMC agreement will be available on Hulu immediately following their first-season runs.

In terms of original programming, a handful of series were announced, with premiere dates ranging from the near future through 2016.

– Casual  (2015), created by Zander Lehmann and executive produced by Jason Reitman, is the story of dysfunctional siblings coaching each other through the dating world while living under a single roof and raising a teenager. Tommy Dewey and Michaela Watkins star.

– RocketJump: The Show (fall 2015), created by Freddie Wong (who also acts as producer and writer) and the RocketJump team. It will encompass eight 30-minute episodes that go behind the scenes on the making of Rocketjump’s latest short films. Each episode will be released weekly, with the short films also premiering on Hulu.

– The Way (winter 2015), created by Jessica Goldberg and executive produced by Jason Katims. The 10-episode drama focuses on a family struggling at the center of a controversial faith-based movement.

In addition to the content announcements, the seven-year old Hulu also declared that its subscriber base now stands at nine million, a 50% increase since 2014. Total streams have also increased by 77% in this year’s first quarter, with viewers streaming more than 700 million hours of prime Hulu content.

Several new advertising approaches were announced as well, including custom 30-second commercials that would integrate the marketer’s brand with the Hulu brand; programming ad buying, that will combine Hulu’s data with that of a brand to optimize audience targets and Hulu’s deal with Cablevision Optimum customers to provide SVOD programming.