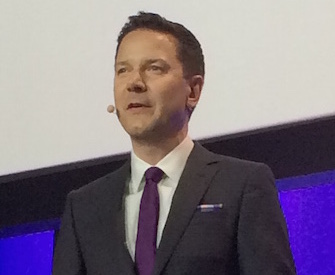 Ostroff and her team announced that The Scene will be growing by another 40 channels in the coming months.

NEW YORK – It’s been a busy year at Condé Nast. It was at the NewFronts in 2014 the media company best known for sleek publications such as Vogue, GQ, Wired and Vanity Fair signalled its intent to up its game in the digital video space with the launch of the online portal, The Scene.

The Scene is home to 18 channels with more than 2,500 original videos produced across tech and travel, celebrity and culture, food and fashion, and gadgets and golf. It boasts an average monthly audience of 76 million adults, many of them from that highly desirable millennial market, according to Dawn Ostroff, president of Condé Nast Entertainment, the digital video arm of the company.

This week, Ostroff and her team of CNE executives were back on the NewFronts stage at Manhattan’s Spring Studios to announce The Scene will be growing by another 40 channels in the coming months. It’s adding sports, comedy, music and what it calls “inspirational content” to the lineup in partnership with the likes of Warner Music, Pitchfork, Red Bull, The Onion, and CollegeHumor. The company is already partnered with BuzzFeed and ABC News.

“We’re taking our business to the next level,” Ostroff told a packed house, in between stylized video promos of upcoming series, befitting the iconic brand. “Our rapid growth confirms what we have always believed: digital video is a strong and valuable business with an exciting future,” she said. As CNE pushes to win a larger and larger digital audience (and advertisers), far beyond its print legacy, there was more to announce this week.

In the year ahead, the company is expecting to produce an estimated 2,500 original videos, including two original virtual reality series, one scripted and one unscripted.

Also premiering is Tyler Zone, a comedy/sci-fi series that will be featured exclusively on The Scene. Created by Keith Schofield and starring Community‘s Danny Pudi, Tyler Zone is presented by Party Over Here, Fox’s comedy development venture with The Lonely Island. Andy Samberg, Akiva Schaffer and Jorma Taccone serve as executive producers.

Appealing to brands eager for a piece of the under-35-year-old market, CNE will launch Vida Belleza, its first channel dedicated to Latino millennials.

“What we care about is what you care about,” said Lisa Valentino, CNE’s chief revenue officer. Valentino said social engagements driven by digital video on the CNE platform have grown 102% since last year.