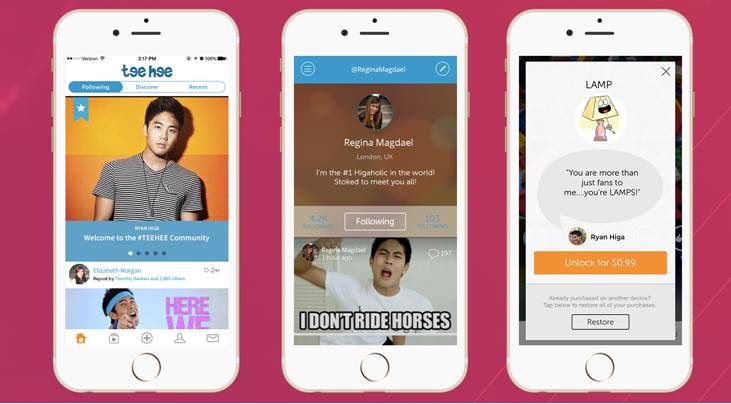 Higa and The Young Turks have already achieved a lofty level of social engagement that is a modern marketing person’s dream, with a respective 14.2 million and two million subscribers on YouTube. Victorious’ pitch to them and other digital influencers is that its customizable, individually-branded app platform gives them a deeper connection to fans and more flexibility and revenue opportunities than YouTube and other purveyors of social video.

“Having brand control and functional control over your own audience and your own company is incredibly vital, but most creators do not have that right now,” says Victorious co-founder and chief creative officer Bing Chen, formerly the global head of creator development and management at YouTube. “They’re beholden to someone else’s algorithm, someone else’s platform.”

Victorious does not have the built-in audience of YouTube, but it offers creators a better revenue share than the Google-owned platform, which gives them 55% of ad revenue generated by their channels. If creators have 500,000 or more followers on a single social media platform (YouTube, Vine, Facebook, etc.), Victorious gives them 70% of the revenue from ads or in-app purchases. If they have anything below that, they get 60%. What’s more, Victorious only takes a cut of the creators advertising and in-app purchases. Victorious does not take a cut of branded content deals, unless they’re involved in their execution or e-commerce.

The other big sales point for Victorious is that it gives digital influencers the opportunity to craft customized mobile experiences. Unlike their YouTube channels, Victorious apps are not branded with the platform’s name. They are unique to the creators like a personal web page. Features can be added that enable users to capture a clip or a still from a video and use it to create a GIF or a meme, and then share it on all their social networks. It also allows creators to include other interactive features such as polls, which they can use to gauge what fans want to see in their next video. The platform also enables fans to interact directly with other fans, as well as the creators.

Tee Hee: The Official Ryan Higa App will feature never-before-seen footage and mashups and a new exclusive game. He will also use the app to host new interactive shows, engage in live chats and enable fans to share their own comedic content.

The Young Turks app will offer behind-the-scenes content, an ability to participate in weekly polls, and political contests and giveaways.