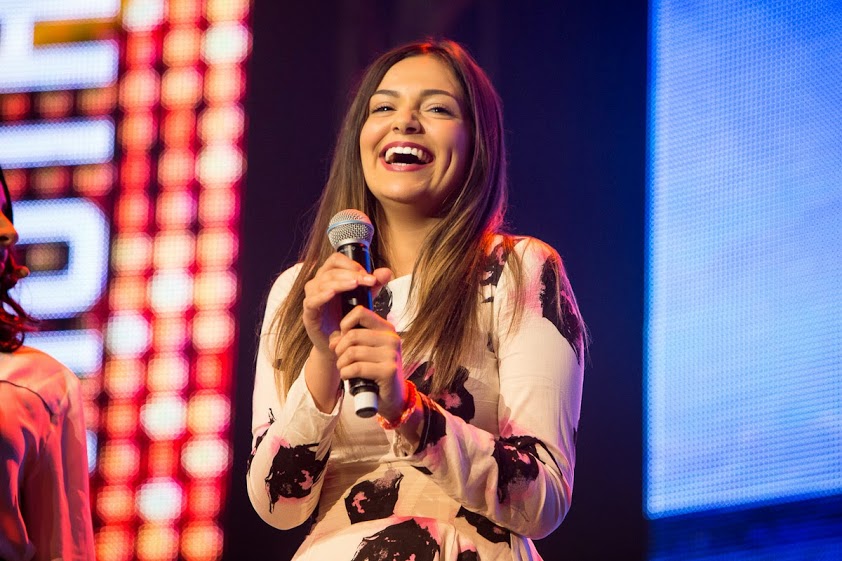 The ladies say fostering relationships with your audience and being authentic are the not-so-secret secrets.

What makes viewers flock to Bethany Mota’s YouTube channel? How do two Toronto-based science geeks register more than three million subscribers and even receive an invitation to meet Bill Nye the Science Guy? How does RachhLoves, the mom of a 19-month-old toddler and former marketing executive, engage fellow moms to try out new products?

Authenticity and community are the two key factors that were echoed by virtually all the participants in last week’s Google Pulse upfront held at the Toronto Design Exchange.

For beauty and fashion icon Mota, her first taste of celebrity status outside her native California occurred when she was brought to Toronto’s Eaton Centre to help launch her clothing line at Aeropostale.

“It never really occurred to me that people in different countries and different states and cities watched my videos,”  Mota told the crowd during a short interview session at Pulse. “I think it shows the power of YouTube and online video in that it really doesn’t matter where you are, you can connect with people globally. No matter what culture you are, we can all relate.”

Mota said that despite all her success – 7.9 million subscribers and average monthly views of 21.8 million – she doesn’t consider herself “a star.”

“I don’t consider myself a celebrity,” said Mota. “It’s more of a community now. My audience become friends through mutually loving my videos. We’ve met up with each other and they send me pictures and it’s like they’re family, and I think that’s so unique. Where else does that exist? It’s incredible.”

Rachel Cooper, another beauty icon better known as RachhLoves, says the most important and rewarding aspect of YouTube to her is” the level of engagement between the content creator and the audience.”

“I’ll upload a video, and I’ll see just from Instagram photos and tweets from people, using a product and talking about a product (that I’ve promoted), seeing that constant response and me being able to respond in real time, we become almost like a family,” says Cooper, whose RachhLoves YouTube channel has almost 500,000 subscribers. “It’s really cool and powerful and unique. It’s king on YouTube – having that authentic relationship with your audience.”

Mota also echoed the point, saying immediate engagement with her following is something she practices regularly.

“I try to upload as often as I can, and not walk away from the computer after a video is uploaded, but respond to comments,” said Mota. “I respond to tweets, post the video on Instagram and on Facebook, and really make my audience a part of everything that I do. Even when I launched my clothing line, I did little mini-series of behind the scenes about how I came up with my name,  logo and I asked them for suggestions. I think what makes my clothing line powerful in that way was, it wasn’t my clothing line. It was ours. It was a group project. And how can you not support something that’s yours?”

But popularity of numerous YouTube stars isn’t restricted to cosmetics.

AsapScience‘s Mitch Moffitt and Greg Brown got the idea to create their own program after former science school teacher Brown noticed what his students were doing during their free time.

“When I was a teacher, it was amazing to see these kids would be watching YouTube videos, and educating me about things that they found online,” recalls Brown, whose site with Moffitt has 3.7 subscribers and has inspired the duo to write a book.

“So now, if kids are interested in science, yes there’s school, but now they have this whole other place where they can find people they relate to, and people can educate them in different ways. And we’re so honoured to be part of that.”

Due to their YouTube success stories, both AsapScience and RachhLoves are expanding – the former into starting another site called Asapdot, the latter teaming with the W Network for a new pilot webseries called Getting Ready For Rachel.

“It’s funny – when I was younger, I always wanted to be a clothing designer,” said Mota. “It was a crazy dream I never thought would be reality. But through doing YouTube and this community, that became a reality.

“So now my main goal is just to be creative – that’s what gets me excited.”