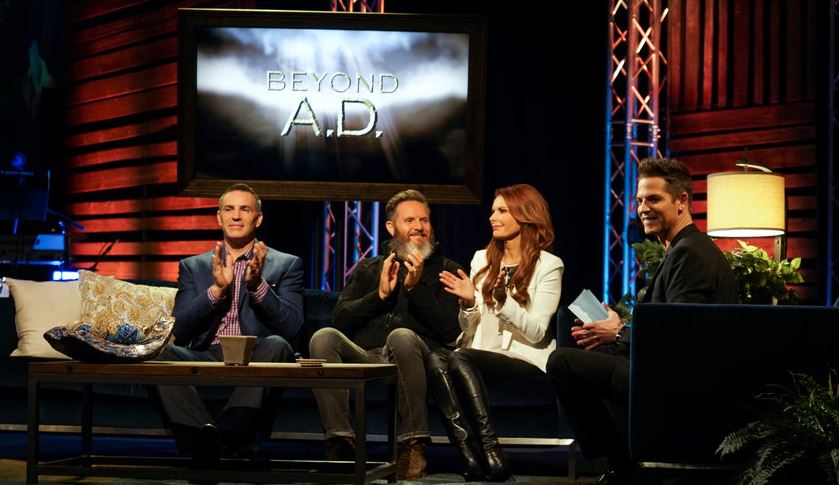 VIMBY goes Beyond A.D. and straight to the heartland

From its tie-in talk show for NBC's A.D. The Bible Continues to the crew that shoots its branded videos, Mark Burnett's prodco is all about Middle America.

Middle America is not flyover country to VIMBY (short for “Video In My Backyard”). It’s where the bulk of the audience for its productions resides, as well as most of its crew base.

The production company’s offices are at the Van Nuys Airport – popular as a private jet departure point for celebrities and Hollywood execs – but the 80 or so freelancers that shoot, direct and edit most of its content are scattered across the nation.

“They’re people who do pretty big things in their local area in terms of great filmmaking and storytelling; the go-to people in Memphis or Wichita or Denver,” says VIMBY chief creative officer and partner David Goffin of its content contributors.

Goffin learned the value of having a decentralized collection of production partners working with VIMBY investor Mark Burnett on his shows Survivor and Eco-Challenge.

“You can shoot anywhere and that footage is shot and edited to certain standard, so that it can be cut together as one piece,” Goffin explains. “In the case of Eco-Challenge, it was one TV show, but in the case of VIMBY, it’s this studio that can be activated at any time. It’s now in 82 cities and in three languages. We can produce content for any brand or entertainment series, and it can all look like one traveling single unit.”

But Goffin says, “our biggest success is stuff people in L.A. and New York don’t see, which is work we do with Walmart. We shoot locally in up to 40 cities a week doing digital and television content for them,” such as Get on the Shelf, a series similar to Shark Tank in which people compete to get new ideas and products into the retail giant’s stores.

At the moment, VIMBY‘s biggest production is shooting at Real Life Church in Valencia, California, just 30 miles north of the heart of Hollywood, but worlds away, spiritually.

The mega church is serving as the location for tapings of Beyond A.D., NBC’s digital talk show companion to its 12-episode limited-run series A.D. The Bible Continues, which is a follow up to the History Channel miniseries The Bible, both produced by Burnett, exploring the life of Jesus Christ.

Hosted by E! Network’s Jason Kennedy, Beyond A.D. was created in the spirit of Talking Dead, the talk show that runs after every episode of AMC’s The Walking Dead. But instead of discussing the week’s zombie killings, it examines the show’s portrayal of the events following Jesus’ crucifixion, and it streams the morning before A.D.’s Sunday night telecast. Featuring cast members, producers, celebrities and musical guests, the show is being marketed as a tool to promote discussion and debate during church services.

For The Bible, “VIMBY did 70 to 80 interviews with the biggest faith-based leaders around the country, from Maya Angelous to Rick Warren and Joel Osteen,” Goffin says. “We would sit down with them in their churches and videotape them for an hour or two, then make 25-minute pieces talking about their favorite scenes from this upcoming miniseries, and they would play that to their church. And that was really a marketing effort. So NBC said, ‘What can we do that’s similar, but not exactly the same (for A.D)?’ And it that turned out to be a digital talk show that was available to churches.”

Shooting Beyond A.D. in a real church as opposed to a Hollywood soundstage not only provides the show with an organic feel, it also gives it production values it otherwise could not afford.

“I don’t have a 10-figure budget like I did for reality shows back in the day,” Goffin says. “You’ve got to find a way to make it right. These mega churches have the equivalent of a studio I would die for, because multi-media is such a big part of what they do.”

VIMBY was founded in 2006 by TV marketing vet Dean Waters, who is still the company’s CEO. It was originally a destination website where people could find hyper-local videos about fashion, music, cooking and other cultural happenings in their area, but the emergence of a certain video sharing platform forced it to pivot.

“The business model was a decent one, but YouTube kind of blew that video-based stuff out of the water, and we became much more of a wily little production company,” explains Goffin, who joined VIMBY in 2010 when Burnett came on board as a partner and its focus shifted to branded video. “It’s actually the only investment (Burnett) has ever made in all of his time in Hollywood,” says Goffin of VIMBY.

To Goffin, today’s digital video space looks a lot like reality TV industry back in the mid-to-late ’90s.

“We didn’t have a lot,” says Goffin of those early reality TV days. “But we grew it, and it became huge, and I think the same thing is going to happen with this.”

Beyond A.D.’s second episode streams Sunday on NBC.com. It will continue weekly through the morning of the TV series’ finale on June 21.