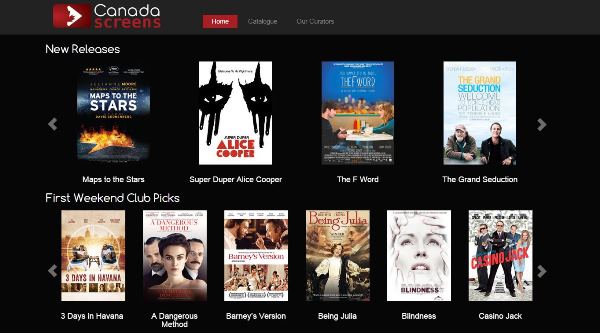 The VOD-based streaming site will offer Canadian films on a transactional basis, and curated lists of personal picks from big-name Canadian film and TV talent.

First Weekend Club has partnered with the National Film Board of Canada (NFB) on a video-on-demand website to showcase Canadian film.

CanadaScreens.ca will feature both new and previously released films and “smaller indie films that don’t fit the conventional distribution model,” an announcement on the site’s debut said. It will operate on a transactional VOD streaming model, with a viewing of each film costing between $3.99 and $5.99.

The site’s star attraction, however, is its curated playlists, featuring a roster of recommendations from high-profile Canadian film and TV talent.

Once a film is chosen, users can then rent a film by clicking a link, which then redirects them a NFB.ca page where the transaction is completed.

Revenue from CanadaScreens.ca will be split between First Weekend Club, the National Film Board of Canada and the rights holders to the films.

The partnership between CanadaScreens.ca and the NFB was key in bringing the site to life, its founders say, as the NFB transactional platform is well-established and has been active since 2009. The NFB had previously partnered with Montreal’s eXcentris cinema for a similar French-language project which demonstrated the website’s viability as a platform for a transactional pay-per-view service, said James Roberts, director of strategic planning, distribution, communications and marketing at the NFB.

And from a brand perspective, CanadaScreens.ca fit the NFB’s mandate to position itself as a reference for the best Canadian independent productions, Roberts noted.

“It just made really good sense for us to be thinking further afield for English-language material and trying to find a partner that already had connections to Canadians around going out to see Canadian films,” he said.

While the current platform for CanadaScreens’ movie listings is hosted on the NFB website, there are plans for the films to be embedded on CanadaScreens.ca as well.

When asked if the NFB website would continue hosting the films once CanadaScreens develops its own transactional platform, Roberts told Playback Daily that he doesn’t see a reason the partnership couldn’t continue. “Their objectives and our objectives are so similar… it would make sense to continue to have the material available on both platforms,” he said.

“The goal is to reach beyond the film industry and find high profile people that are recognized as personalities. Someone like Margaret Atwood would be wonderful,” she said.

And although the website is currently geo-blocked within Canada, Adams says there are plans to expand it to a global audience.

Currently, promotion of CanadaScreens.ca has been limited to social media, though Adams says her team is busy knocking on doors for marketing funds.

“We’ve got a lot of big hearts, a lot of passion and pennies currently so the stuff that we’re doing is going to be a small slow burn,” Adams said.

Adams also hopes the platform can secure collaborations with film festivals in order to better promote the website’s content, building upon a strategy deployed by the NFB and the Whistler Film Festival in December. Ninety minutes after the world premiere of After Film School at the Whistler Film Festival, the film was made exclusive available on the NFB.ca website for two weeks, at a cost of $9.95.