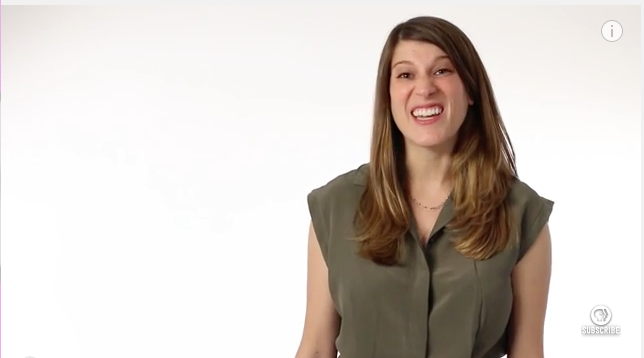 How host Anna Rothschild has taken a childhood obsession with all things disgusting and turned it into a video series.

Host Anna Rothschild hasn’t yet trademarked the standard coda of her new Nova, WGBH Boston and PBS Digital – produced series Gross Science, “but I would if I could,” she tells StreamDaily with a laugh.

Publicly funded by PBS science series Nova, Gross Science, a 40-webisode series consisting of two-and-a-half minute videos exploring “the disgusting and bizarre side of science,” is the brainchild of Rothschild, which allows her to continue a childhood fascination with the grotesque.

“I have a background in science journalism, but the things that first that drew me to science as a kid were the most disgusting topics, like dissecting owl pellets in class, or playing with disgusting slime chemistry sets as a kid,” says Rothschild. “When I was in the third grade, I thought I wanted to be a bio-chemist, because I thought that meant you got to make slime all day.”

Rothschild says the series, which launched April 8 and will debut a new video every Wednesday on its own dedicated Gross Science YouTube channel, was the result of a pilot project she directed two years ago.

“In 2013, we started to think about developing an original series and a way to reach a slightly younger audience, since we see ourselves as a resource for lifelong learners,”  explains Rothschild, who holds a bachelor’s degree in biology from Brown’s University and a master degree in science journalism from New York University.

“So when I started thinking about creating a series, the first thing that came to mind was doing something on gross stuff, in part because I had made a video on slime moulds and how smart they are, and it had done quite well for Nova, so I knew there was an audience out there. The pilot episode was called ‘The Tongue-Eating Parasite.’ I did it with collage and paper cutouts, and within the first couple days it got 300,000 views and 625,000 overall.”

The show’s updated format combines scientific imagery with animation sequences, as Rothschild attempts to temper some of the queasiness with animation, injecting bits of humour along the way.

“I think people should just have a lot of fun with science,” Rothschild explains. “Obviously there’s serious stuff here that scientists are doing, but just like anything, there’s a lot of whimsy and humour. Why not reveal that?”

Rothschild says her litmus test of success would be the incorporation of some of Gross Science into classrooms, “because I really think for kids and teens it’s super important for them to find narratives and story in any topic that they’re learning.”

As for the host, is there anything that really grosses her out?

“I have a pretty high tolerance,” she responds. “But…for example, I was thinking about doing an episode on tonsil stones. They’re little concentrations of matter that get trapped in your tonsils. You can get lost in watching YouTube videos of tonsil stone extraction, and for whatever reason, they gross me out so much. And they don’t even do anything. They’re not harmful to you. They’re not even a parasite. But something about them being in your mouth [is] really, really gross.”

Whether it’s talking about tonsil stones, sea cucumbers or a nasty not-so-little larva called the Guinea worm, Rothschild – who averages about a week-and-a-half of production to complete each episode – says there is plenty of grist for the mill when it comes to future topics.

“I would love for the series to go on after 40 episodes. I had to brainstorm 40 episodes and I ended up finding 80 off the top of my head. There’s a wellspring of grossness in the science world.”

Here’s one of the first episodes, “How Different Diseases Make You Smell:”