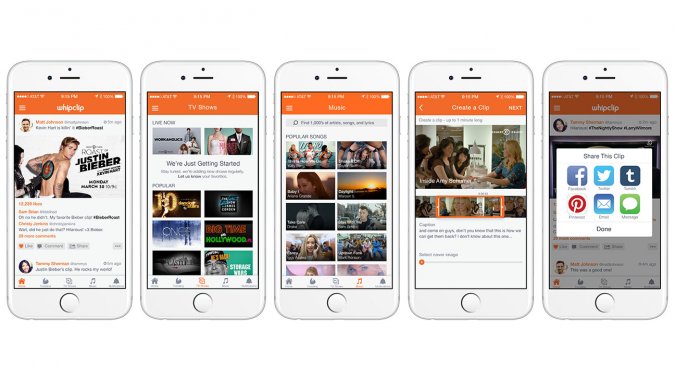 Whipclip announced the release of its free mobile app on Thursday. Through partnerships with television networks and major music labels, it allows fans to legally create their own video clips of television shows and music videos to share them instantly on Facebook, Twitter, Tumblr, Pinterest and via email and SMS. It is currently available only iOS devices.

Whipclip’s network TV partners include Comedy Central, ABC, CBS, FOX, VH1, A&E and Lifetime, Bloomberg, OWN and truTV. At launch, users can create and share clips from TV shows such as Bob’s Burgers, Castle, Charlie Rose, For Better or For Worse, Inside Amy Schumer, The Late Late Show with James Corden, The Last Man On Earth, New Girl, Once Upon a Time and Workaholics. They can also clip and share thousands of music videos from the catalogues of Universal Music Group and Sony Music.

Whipclip launched in December by entrepreneurs Richard Rosenblatt and Ori Birnbaum. In January, the company hired former Hulu content development head Charlotte Koh as SVP of content and partnerships, overseeing content acquisition and the development and management of relationships with media partners.