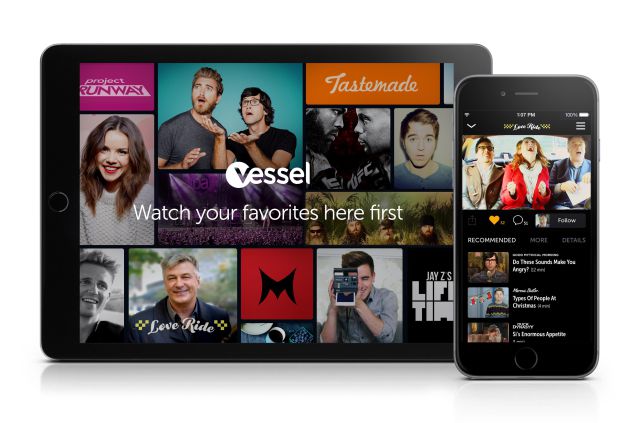 Vessel launches, says it’s ‘not a competitor to YouTube’

Building audience is the primary focus of the new paid-subscription service, which is offering a free year-long trial as a promotion.

The online video platform Vessel officially launched on Tuesday at 12 a.m. PT, after 90 days of beta testing and nearly a year and a half of anticipation since former Hulu execs Jason Kilar and Richard Tom announced they were teaming to create a company mysteriously dubbed The Fremont Project in the fall of 2013.

In an email announcing the launch, a company representative emphasized that the platform is “not a competitor to YouTube.” But Vessel’s key selling point to IP owners is that it offers exponentially higher CPMs than the Google-owned video hosting behemoth and other ad-supported video hosting sites. In return, Vessel gets a 72-hour exclusive first window on creators’ content, available to subscribers for $2.99 a month. After the exclusive window, the videos become available on free ad-supported services, including Vessel’s own free, ad-supported tier.

But if viewers don’t discover Vessel, content providers will be getting a large percentage of not very much. To attract users, Vessel is offering everyone who signs up for the platform in the next 72 hours a free year of access to its premium exclusive first-window content, with no strings attached or credit card info required. It can be accessed via Vessel’s iOS app or on Vessel.com.

Vessel’s free ad-supported offerings include comedy from Funny or Die and CollegeHumor; music videos from Vevo, Universal Music Group and Warner Music Group; sports videos from the Fox Sports, NBA, Major League Soccer, UFC and Universal Sports,; news and consumer videos from Time Inc., the New York Times, BuzzFeed and What’s Trending, and inspirational videos from organizations such as TED. Additionally, NBCUniversal will provide clips from The Tonight Show Starring Jimmy Fallon and Late Night with Seth Meyers a day after they air, starting next week.

Videos that premiere with a 72-hour first window exclusive on Vessel earn their owners a 70/30 split on ad revenue for the entirety of the content’s life on the platform. Additionally, Vessel will give IP owners 60% of the subscription fees generated during the early access period, which runs Tuesday to Thursday. Vessel has estimated content providers will earn approximately $50 per 1,000 views, which is 20 times what they would earn on the typical ad-supported video platform.