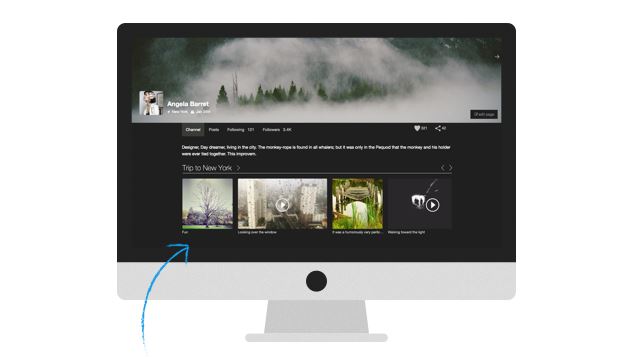 Currently in beta, the video, photo and text sharing platform launched last week with content partners that include Usher and Jamie Oliver.

The new video, photo and text sharing platform 8 (Weare8.com) launched last week with an impressive list of high-profile partners, including celebrities Usher, Patricia Arquette, Jamie Oliver and Donna Karan, as well as the Sundance Channel and the multi-channel network One Kind Media.

But, for creators, the big news is that 8 offers them 80% of advertising revenue generated from their content, if they choose to accept ads.

That compares to YouTube, which reportedly gives creators a 55/45 split of ad revenue. It also bests Vessel, launched late last year, which asks creators to give it a 72-hour exclusive first window on their content, available to subscribers for $2.99 a month, in return for a 70/30 split on ad revenue for the entirety of its life on the platform.

The platform will also partner with more than 35 non-profit foundations, including Charity Water, UN Women and Pencils of Promise. It will not only provide the organizations with a platform to tell their stories, but will also encourage other members of the community to lend their voices to various initiatives, as well as contribute a portion of their earnings to the causes.

Of course, the money will only come to the creators if the viewers show up in large numbers. At this point, the primary lure is celebrity contributors such as Oliver, who will share his inspirational thoughts on food and his mission for better food education

At the moment, 8 is in closed beta mode. Potential users must submit their email address and request a log-in code. The company says the platform see its user base grow each week. Every new member is given 8 invites to give to friends, and it has also provided its 300-plus content partners with invite codes to give out to followers. Over the next few weeks, 8 plans to determine the timing for its full public launch.

The company is the brainchild of serial entrepreneurs Sue Fennessy and Beth Haggerty. Fennessy is the founder and CEO of ad intelligence data company Standard Media Index. Haggerty is the former CEO of Powerlinx, which finds new opportunities and partnerships for companies, and the co-founder of the social networking site Ology Media. Fennessy is founder and chairman of 8; and Haggerty is its co-founder & CEO.

“Social networks have helped people connect and share content, but what has remained challenging for many people is how they profit from their creativity in a digital world where everything is free,” said Fennessy in a statement. “There are more than 2 billion social media users across the globe, constituting what would be the largest single unpaid workforce in human history. Our aim is to empower and reward these people for the content they are already creating.”