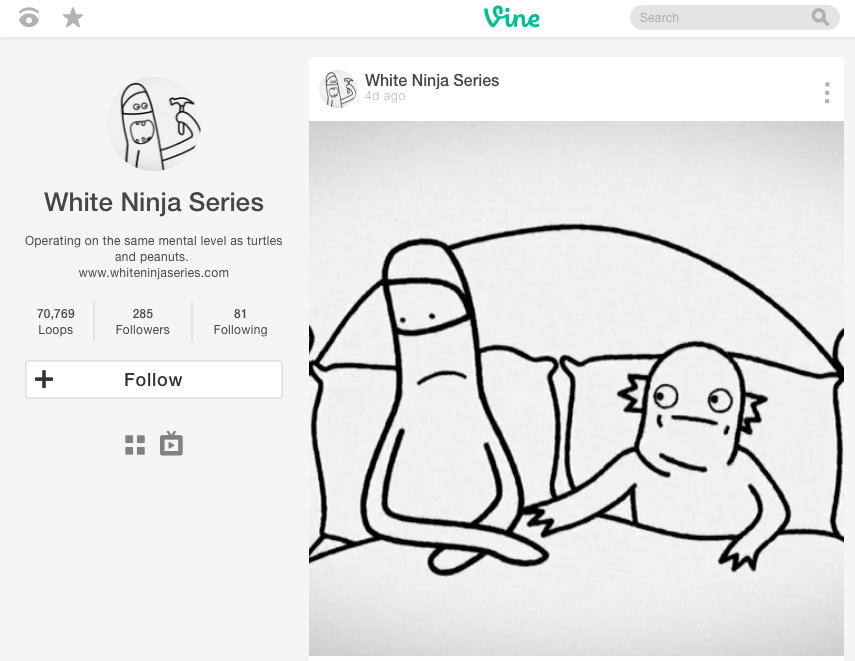 Whiskaye Films and North of Now Films are developing an animated web series based on the now-defunct webcomic, with several teasers and a trailer now available.

North of Now Films and Whiskaye Films have partnered to bring back the now-defunct, Canadian-created webcomic White Ninja as an animated web series for Vine.

The original White Ninja webcomic was created by Saskatoon’s Kent Earle and Scott Bevan, and appeared on Cracked.com before it went on an “official hiatus” in August 2013. The White Ninja web series is still in development, but the prodcos have created a 30-second animated trailer and three teasers that will roll out on Vine in the coming weeks. Erick Griogorovski is also attached to the project as its lead animator.

The off-the-wall, absurdist nature of White Ninja makes the content well suited for the six-second format of Vine, said Whiskaye Films founder Jameson Parker, and allows the prodcos to take advantage of a platform that is still on the upswing.

“It’s a new space just on the verge of where YouTube was about 4 years ago,” Parker said.

The creative team at Vine is excited about White Ninja and how the producers are developing the property specifically for the platform, Parker said, but Vine cannot yet provide financial support to effectively “greenlight” a series.

The producers are currently seeking additional financing to produce more episodes, and various digital studios in the U.S. have expressed interest in the series, Parker said. The producers are also open to branded content opportunities and are applying for support from the Independent Production Fund, Parker said.

Eventually, the producers would like to see White Ninja become a TV series in the vein of SpongeBob SquarePants or Adventure Time. Parker said the hope is to leverage the existing fan base of the comic to help build buzz around the Vine series, and then use that popularity to pitch the show to a broadcaster.

As for why the team opted for an online outlet initially over a linear one, Parker said the ‘net “is where White Ninja started” and getting the buzz going via Vine can make some headway in “reinvigorating the fan base that is there.”