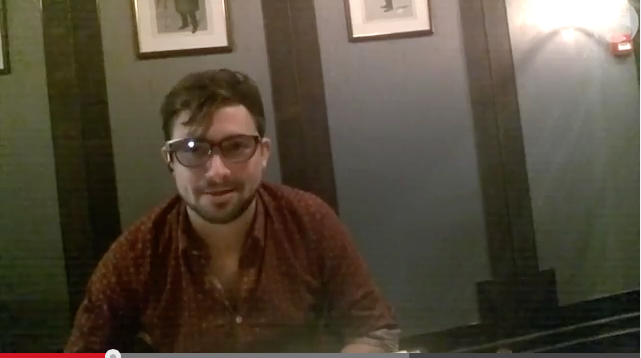 Watch Me Date, an online video series financed by The Guardian, uses Google glasswear to provide a window on first dates.

Watch Me Date executive producer Merrope Mills admits she had a bit of an anxiety attack the moment Google announced its was discontinuing its Google Glass eyewear.

That’s because the premise of the online video dating program relies on two people wearing Google Glass eyewear, so outsiders can eavesdrop on the first date as it materializes before them.

“The day that Google announced that they were stepping away from the Glass and distancing themselves from it, I was a bit worried,” Mills tells StreamDaily with a chuckle.

“But there will always be wearables, and what’s great about it is the format that you see, not how it’s shot. The Glass is unique, but we could have put a bunch of pinhole cameras in a pair of normal glasses. There are other ways.”

Spawned from the popular Blind Date column in U.K. newspaper The Guardian that was originally introduced by Mills seven years ago, Watch Me Date follows a man and a woman as they embark on their first get together.

“It’s literally the video incarnation of a very popular column in the Guardian Print section. At the time I thought it would make a brilliant video series but it was too complicated to shoot: as soon as you stick a camera in someone’s face, they act all different.

“Then Google Glass came along and we thought, that’s the cheap, unobtrusive way to do it.”

While the Google Glass eyewear records what transpires during the date over the course of several hours, the excursion is edited down to a five-minute package and posted both on the paper’s website and YouTube.

“It’s quite cheap to produce, but the edits are very time-consuming,” notes Mills.

So far, Mills and the Guardian crew have shot eight dates and released them on a weekly basis. She says it’s proved so popular that they’ll be filming a second series of “at least eight dates” and we’ve also been contacted by three or four production companies about developing a format for television.”

She also says that advertising and brand content integration would be considered for the second series “to anyone who is interested.”

Mills says the best part of Watch Me Date is that the program is timeless.

“What’s great is that this is an evergreen concept,” she says. “You can watch the dates a year from now and still enjoy them. They tend to have a long life.”

On January 15, Google announced that it would stop manufacturing the Google Glass prototype, but remain committed to evolving the product.