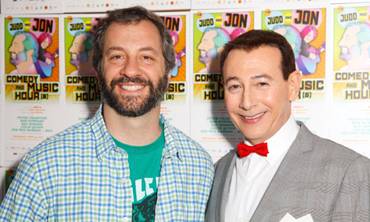 Paul Reubens is teaming with The 40-Year-Old Virgin filmmaker for the bow-tied man-child's third movie outing.

Netflix announced on Tuesday that it will premiere the new feature, Pee-wee’s Big Holiday, starring Paul Reubens, exclusively in all territories.

Production is scheduled to begin in March. A release date has not been announced.

“Judd and I dreamt up this movie four years ago,” said 62-year-old Reubens in a statement. “The world was much different back then — Netflix was waiting by the mailbox for red envelopes to arrive. I’ve changed all that. The future is here. Get used to it. Bow tie is the new black.”

Reubens created the character of Pee-wee Herman while he was a member of the Los Angeles improv group, The Groundlings. The Pee-wee Herman Show premiered at The Groundlings Theatre at midnight on Feb. 7, 1981, and soon moved to The Roxy on Sunset Strip, where it ran for five months. In the fall that year, a live taping of the show aired as an HBO special. After touring nationally with the Pee-wee show in 1983 and taking the character to New York’s Carnegie Hall in 1984, Reubens brought him to the big screen in 1985 with Pee-Wee’s Big Adventure. Co-written by Reubens, fellow Groundling Phil Hartman (later of SNL) and Michael Varhol, it was the directorial debut of Tim Burton.

The film was a hit, and Reubens went on to create, co-write and co-direct the CBS Saturday morning show Pee-wee’s Playhouse, which earned 22 Emmys during its 1986 to 1991 run. A big screen sequel, 1988’s Big Top Pee-wee, was less successful.

In 2010, he revived The Pee-wee Herman Show on stage at L.A.’s Nokia Theatre and on Broadway at the Stephen Sondheim Theatre, where it was recorded for an 2011 HBO special.