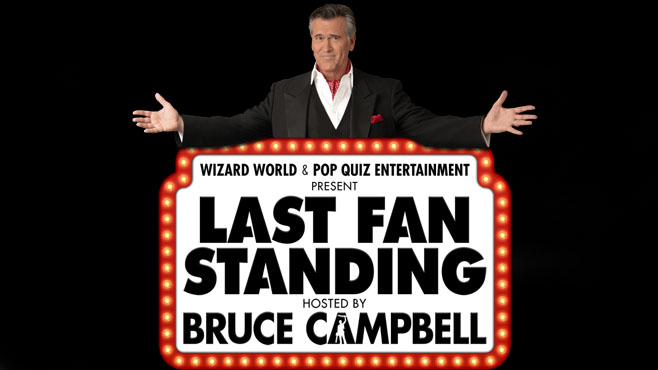 The Burn Notice star talks about how he came to host the new online game show Last Fan Standing.

It’s an interesting time in the life of Bruce Campbell. As the one-time Burn Notice star prepares to revive the demon-slaying character that first launched his career in the ’80s in the upcoming Starz series Ash vs. Evil Dead, the 56-year-old actor is also making a play to become the Wink Martindale of the streaming video space.

The comic con fixture is washing off the fake blood and donning a sports coat to host the game show Last Fan Standing, one of the flagship programs for ConTV, a new geek-friendly OTT service launching March 3.

Fans won’t have to worry about Campbell adopting an Alex Trebek-style patronizing tone. His put-downs will be overt.

“I get to insult the players if they suck,” Campbell says. “It’s just the way it is. So it has a light, fun tone.”

As is common in the world of online production, the show didn’t follow the classic Hollywood TV development route.

Campbell met producer Steve Sellery when the two collaborated on a live military quiz show, Qu​est for the Best: The Armed Forces Trivia Challenge. As the two were trying to secure a date for him to do that show, Campbell told Sellery about his many appearances at Wizard World comic con events, which led to them formulating the idea for Last Fan Standing.

Campbell and Sellery retooled it for pop culture trivia and tried it out at a comic con in Chicago.

“That went over well enough that ConTV jumped in, and then we formed a partnership and we decided to make the show and give it a go,” Campbell says.

Contestants answer questions about comics, television and movies like “What does Thor’s hammer weigh?” and “How much damage would the Vorpal blade inflict on a 5th-Level Cleric?”

“When you’re involved in nerd-dom or geek-dom, to be the guy or the woman who has the answers is so important,” says Chris McGurk, CEO of Cinedigm Entertainment, which is launching ConTV in partnership with Wizard World. “At the end of the year, there will be one guy who gets to wear the belt as the last fan standing, the biggest geek in geekdom.”

Campbell says while he definitely has street cred in the genre world, mastering game show hosting has been a challenge.

“You have to keep the game going, you have to drive it forward. You can’t just sit back and crack jokes,” Campbell says. But, he adds, “I’m the perfect age to be a game show host.”

Campbell also thinks the time has come for streaming video.

“This is how TV is going to be done,” he says. “Nobody is going to sit and watch a show at 8 o’clock on a Tuesday night, because they don’t have the time and they no longer have the interest. They want it on their iPad, in lap, on the airplane. And everybody will pay for it. And everyone’s going to make money. People just have to get up with technology. But television, where you sit down and watch it live with the commercials, it’s dead, dead, dead.”