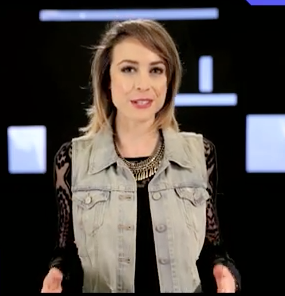 Shira Lazar on getting ‘Huge on the Tube’

The What's Trending host on her new VH1 show about viral video sensations.

On Tuesday, VH1 launched Huge On The Tube, a 12-episode digital series that features a look behind the making of the biggest video viral sensations.

Hosted by veteran digital reporter Shira Lazar and co-produced between VH1 and Lazar’s own What’s Trending live interactive TV show, Huge On The Tube consists of 3-to-4-minute episodes each featuring an interview with such YouTube stars as Todrick Hall, Jenna Marbles and Michelle Phan.

The series, which is rolling out with new episodes daily on VH1.com and YouTube, also features commentary from numerous social media creators and personalities.

The Montreal-born Lazar, who serves as Huge On The Tube executive producer with Damon Berger, spoke one-on-one to StreamDaily about her new show and future social media trends.

How did you come up with this idea?

Lazar: I personally have been covering YouTube culture and digital video for 10 years, and as digital video became more focused on YouTubers and the culture around that, I found my beat in interviewing these stars. I considered myself a digital broadcaster and storyteller, it became my niche to tell the stories of these stars and bring it to a broader audience. What’s Trending developed out of that passion as a brand and grow bigger than me and empower other talents. That’s why this was such a good fit – VH1 was trying to figure out their programming for the YouTube set and how they could more authentically tell their stories.

Having grown up with shows like Behind the Music and Pop-up Video, so much centers around pop culture and what we do is really internet pop. It was a fun fit figuring out what that would look like for viral videos converged with YouTube’s star culture and community.

“We looked at the viral videos that really brought these creators into the spotlight. How did it change their careers? Why was there such an impact, as well as bringing in commentary from other creators and personalities. That’s how it evolved.”

Has this given you an opportunity to unravel the mystery behind making a successful viral video?

Lazar: There’s not one type of viral breakout video.  I think we have a sense from where we see a video starting to be shared within the early adopter community, whether it be in our own social networks or sites like a Reddit. We’re naturally people who are invested in the Web and the community and passionate about Internet culture and all things digital. Through that sense of natural curiosity, we have a sense of things before they’re going to make it big and go viral. But there’s not really one way to do it.

What’s great about this community, if you have a niche interest, in that specific niche, everyone knows about that thing. It doesn’t mean you have a broad audience. I think what we’re seeing now is more and more people starting to get broader, and there are those videos that go majorly wide, and that’s happening more and more as those audiences are on platforms, because it’s going from an underground sub-culture to a mainstream culture.

Are there any viral video trends that you don’t like right now?

In the world of virality and trends and views there is always going to be clickbait, going between quality and what is sustainable and engaging versus just getting clicks and views.  As more advertisers, brands and big companies get involved, how do you build long-lasting properties and community while thinking about stealing viewership? Then how do you move that audience to other platforms, and engage them in places that they may not be used to? Those are things that we’re all thinking about. And there are more YouTubers in TV shows and launching feature films. What does that all mean to the ecosystem?

There’s no going to be a social solution right away, because it’s about building relationships and loyalty. None of these things happen overnight. Even these digital stars’ careers didn’t happen overnight. We need to look at all these other projects and give them time to breathe and transform.

You’ve completed 12 episodes of Huge On The Tube that will roll out daily. What’s next?

Lazar: There’s no lack of stories and creators. We can go back into the 10 years of YouTube, where there’s a ton more videos, a ton more creators, and there are constantly new people popping up. It’s an endless universe of creators and content, so I’m excited for the possibilities. This is just the tip of the iceberg. I hope it becomes an archive like many of their series that cover different artists and videos over the years.

Will there be any opportunities for advertising or branded content with Huge On The Tube?

Lazar: That’s something [for] VH1. I think everyone in our space is figuring out and navigating that on a daily basis.

That’s the fun and magic of this space – you never know when someone’s going to become a star and have a story to tell. With What’s Trending, we produce videos daily and we’re churning and burning  24/7 on what’s hot on the Web, and we’re working with partners like VH1 and advertisers and brands like Samsung and PayPal for SXSW. We’re a startup next generation video brand in a space that is changing every day, and that more and more people are wanting to be involved in. So we’ve been doing this for years, but it’s nice to see it mature and blossom and be a big part of that.

It seems that every day there’s a new platform or a new technology. How do you handle the accelerated learning curve?

Lazar: You need to be able to have fun with it and be curious, and to move into things and be okay with not knowing anything. There’s Snapchat and there’s Vine and there’s Instagram: we thought that it was over when there was YouTube. So I think acknowledging that it’s never over and that you constantly need to learn new things and are excited by that will help you. Being involved in the culture is important, because you learn more from the people in it on the ground and in the trenches, and doing your own thing, so it’s a mixture of things.

Screen shot of Shira Lazar from Huge On The Tube.