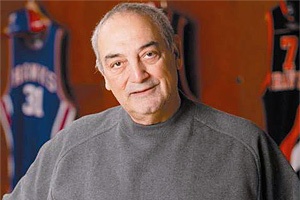 Sole Man, which tells the story of legendary sports marketing exec Sonny Vaccaro, will premiere on Grantland.com before it makes its TV debut.

ESPN Films is premiering one of the films in its popular ’30 for 30′ strand online, before its television debut.

Sole Man, which tells the story of legendary sports marketing exec Sonny Vaccaro (pictured), will premiere on Grantland.com as a six-part web series on April 6, with its television debut slated for April 16.

Vaccaro was a key player in the launch of Nike’s “Air Jordan” brand and in the 1970s and 1980s, signed basketball coaches to deals that would see players hit the court in Nike shoes – deals that would transform both the sports marketing industry and the game itself. After his stint at Nike, Vaccaro went on to Adidas, where one of the first players he signed to a similar shoe deal was an up-and-coming Kobe Bryant.

“Considering Sonny Vaccaro’s much-debated influence on basketball has spanned five decades, played out in so many defining stories within his larger narrative, and touched so many huge names like Michael Jordan, LeBron James, Kobe Bryant and Phil Knight, we thought this ’30 for 30′ warranted an unprecedented roll-out,” said ESPN Films vice president and executive producer John Dahl in a statement. “By featuring the film in a series of chapters over an entire week on Grantland.com in advance of the TV debut, we believe we’re giving it the kind of presentation style and weight that matches his persona and impact.”

The project, five years in the making, is exec produced by Jamie Patricof, Cash Warren and former NBA All-Star and host of Esquire Network’s How I Rock It, Baron Davis.