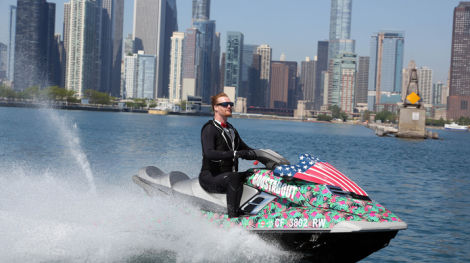 Goats and jet skis an unlikely pairing in Roustabout

Comedy Central's digital division CC:Studios premieres a show about buying goats for charity as it announces 2 renewals and 5 series in development.

Ever wondered what it would be like to jet ski from New Orleans to Chicago to raise money to buy goats for charity?

Neither have we, but regardless, comedian Kurt Braunohler took it upon himself to raise $50,000 for Heifer International, and the results are captured on a new 12-episode Comedy Central.com series called Roustabout that premiered Jan. 26.

Comedy Central’s in-house multi-platform division CC:Studios is also ramping up its production schedule for the year ahead by announcing the renewal of 2 series and development of 5 more shows.

Matt Braunger, Rich Fulcher and David Angelo all have untitled projects they’re developing for CC:Studios, while Sean O’Connor’s How to Be Friends With Everyone on Earth and the Taylor Orci-Jared Nigro-Scotty Landes co-write Broken People round out the green-lit shows.