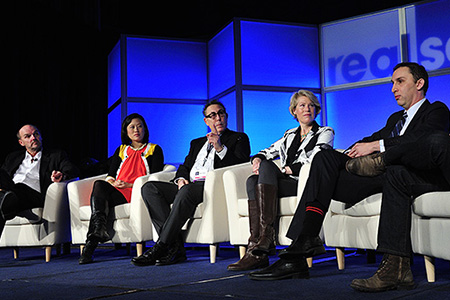 Disruption is the new normal

YouTube Originals' head of unscripted Ivana Kirkbride went up against execs from HGTV and WE tv in a Realscreen Summit session Thursday.

If the podcast Serial was a slotted PBS radio program, would it have been as successful? Does YouTube consider itself a storytelling platform? And could a digital service ever pay as much for a Kardashians-style show as the network E! did for television?

Such were the questions debated between execs and agents gathered on a Realscreen Summit panel entitled ‘Change is Good?’ on Thursday.

“We want to help think through franchises that could be our version of The Kardashians or our version of Duck Dynasty,” said YouTube Originals’ Ivana Kirkbride

Moderated by Evan Shapiro – the exec VP of digital enterprises at NBCUniversal – the conversation ran the gamut of unscripted’s present quandaries: from the growing irrelevance of Nielsen ratings to the “survival of the fittest” among traditional broadcasters. One thing, however, was abundantly clear – disruption is the new normal.

“(WE tv president and GM Marc Juris) and I are both probably kept awake at night wondering how we’re going to get people to come to our television shows,” said Kathleen Finch, president of HGTV, DIY Network and Great American Country.

“We do schedule our programs with a very smart lead-in, lead-out flow, but if you’re 28 years old, you’re not used to having shows delivered when Marc and I decide that they’re going to be delivered. They’re going to be delivered when you want it,” said Finch. “I think if Serial had been on PBS radio or any other platform that was just available when it was scheduled, I can’t imagine it having been the hit that it is.”

Of course, Finch can’t be losing as much sleep as her colleagues: cable networks may be shedding audiences, but HGTV was one of the few that grew last year.

“Cable television was disruptive a few years ago. It’s not disruptive anymore, but YouTube is, and we have a YouTube channel on HGTV, and we just did a deal with Food Network to be on Snapchat,” said Finch. “I think embracing the disrupters is the right thing to do because while we as an industry might call it disruptive, our viewers say it’s just one more opportunity to get our content and if we don’t listen to our viewers, we’re all screwed.”

Pointing to YouTube’s shift into mobile viewing, which was once considered risky, Ivana Kirkbride – head of unscripted of YouTube Originals – agrees that disruption is a risk worth taking. The exec was on hand to discuss the company’s push into unscripted, which is being targeted for the platform’s roster of online stars.

“Our audience is very different from the audience you may see on linear programming,” responded Kirkbride. “They’re used to watching content at very short spurts of time. And a lot of them don’t have cable or TV so they’re watching a lot of the content through mobile. So our series orders may be a little bit different.”

Rather than commissioning half-hours, YouTube may be ordering 5- to 10-minute videos, and is “looking at the format of what a series is in a very different way,” she said.

It’s such differences that are setting the scene for a “survival of the fittest” among traditional platforms, offered WE tv’s Juris. “It’s putting pressure on everyone’s margins because I know we feel it all the time. The good old days are gone of just adding and adding subscribers and your ratings just naturally going up. So we have certainly more (content) with less viewers.”