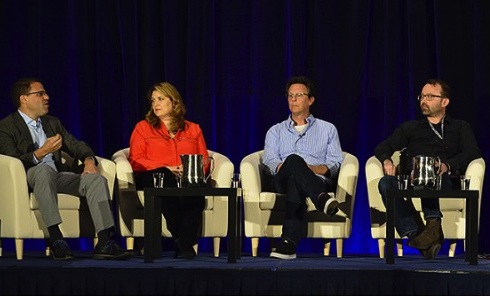 The ways producers are making money in the world of digital video has been a topic of interest – albeit a usually mystifying one – at the Realscreen Summit for the past few years.

During “The Next Wave,” a panel session moderated by digital media strategist and Jumpwire Media founder Gavin McGarry, a group of producers making inroads in the digital video market discussed the ways they are monetizing original online content and whether or not a hit on YouTube will translate into a hit on linear TV – and vice versa.

In addition to producing reality series for networks such as VH1, Bravo and Fuse, World of Wonder (WOW) runs a multi-channel network of 70 YouTube channels featuring personalities from its various programs, such as RuPaul’s Drag Race. The idea is to establish WOW as a brand among viewers who are fans of Drag Race, for example, but may not know the company is also behind reality hits such as #Candidly Nicole and Million Dollar Listing.

“When we were pitching shows to networks that featured YouTube stars, networks were generally not that interested,” explained Fenton Bailey, World of Wonder co-founder, adding that YouTube stars are often content to stay on YouTube. “I think they are distinctly different worlds.”

Bailey argued that the way to make money off of digital properties is to parlay a YouTube star’s popularity into licensing and merchandising deals.

For example, Drag Race is the most popular series on Viacom-owned cable net Logo but execs there are not interested in programming more drag queen shows as a result. So, World of Wonder is exploring other avenues to take advantage of the show’s online following, such as a feature film and Drag Con, a Comic-Con-type conference for drag queens.

“You have to broaden out and look at digital, TV and all media. It could be books, it could be T-shirts. It could be any number of those things. If you are a creator you have to create in all these different spaces,” he explained, adding that physical experiences will become more important the more all-encompassing digital becomes. “It’s almost like, how can we use every part of the chicken?”

A YouTube personality with a proven audience base will typically attract the attention of development execs at cable network VH1, but the channel’s SVP of west coast production and development Jill Holmes cautioned that not all online talent translates to TV.

Although VH1 is investing in more online original content, it is not yet profitable. McGarry noted that none of the brands his agency works with make more than 10% of their revenue from digital content.

“It’s about getting eyeballs to the channel,” Holmes said, adding that the network is investing in apps to launch programs – such as a recent TV biopic about R&B group TLC – and promote exclusive content among younger online audiences who do not subscribe to cable and probably never will.

Condé Nast Entertainment‘s VP of production Jed Weintrob noted that the reason online stars fail to cross over to linear TV is due to the way they are treated by networks. The channel focuses shareable content featuring “influencers” who are savvy at attracting viewers to the company’s various channel brands.

“When they migrate (to TV), I feel like they are being looked at like acting talent,” he said. “They are creators. They have a much deeper relationship with their audience than just being a performer.”

An online property that has proved financially successful is the comedy series Video Game High School, which has upwards of 500 million views. Collective Digital Studio co-founder Gary Binkow said the company repackaged the show for Netflix and made international licensing deals with distributor Red Arrow International. “It’s a very profitable endeavor,” he said.

Similarly, Barcroft Media founder Sam Barcroft — who announced a series of long-form, self-funded docs at the Summit on Wednesday (January 28) — said the success of his short-form videos featuring extreme corset wearers, babies playing with snakes and other viral video-esque content, has led to commissions and partnerships with linear TV producers such as Zig Zag Productions.

One service he is keeping an eye on is Facebook’s video sharing tool. Videos posted on a brand’s Facebook page receive double or triple the views of photos, he explained, and provide useful data on the ways people engage with the content and for how long.

“That’s an algorithm that will change everything this year,” he said.