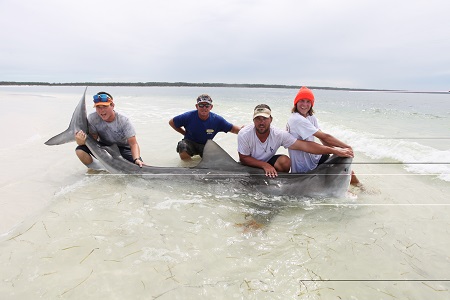 The self-financed, half-hour documentaries will debut on the Barcroft TV YouTube channel before becoming available for linear TV acquisition.

The docs include 1-800 Autopsy and Landing Sharks (pictured). They will premiere on YouTube under the banner Original Docs before becoming available for linear TV acquisition. The other 4 docs will be announced at a later date.

The company, which is known for short-form and viral videos, is hoping the docs will satiate increased desire among viewers for long-form content.

Barcroft recently conducted a 3-month analysis of user data gathered from more than 200 million views of its short- and long-form content available across YouTube, Yahoo Screen, Dailymotion, MSN and other digital video sites.

That content included docs produced through Barcroft’s co-production partnerships with ITV Studios, Off the Fence and Zig Zag Productions. As a result of the study, the company is committing to self-fund more long-form content.

“We’re now seeing sustained demand for long-form documentary content – particularly brand new, original shows depicting the amazing side of life,” CEO Sam Barcroft said in a statement. “Our digital content and TV production businesses, together with our editorial team’s output and deep data analysis have now reached the point where each part of the business fuels the other.”

The company’s recent network commissions include the hour-long doc Grandmother Lover from Channel 5 in the U.K., which will air in 2015. A shorter YouTube version of the film originally debuted online via Barcroft TV.

Barcroft, who participated in the digital video panel The Next Wave at the Realscreen Summit on Wednesday, is pitching the doc to U.S. nets. He is also pitching Seniors Behaving Badly, an American version of the OAPs Behaving Badly pilot that Channel 5 has greenlit to series.