The event will be streamed on YouTube's AdBlitz channel, which is built around commercials. 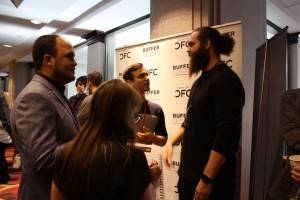 Brands spend big bucks to buy media time on NBC during the Super Bowl, but if their creative is effective the commercials will gain a following before the game even starts.

Last year, Super Bowl ads were watched more than 160 million times on YouTube before kickoff. This year, the platform wants to keep that momentum going and even divert audience attention away from the Patriots vs. Seahawks game with a halftime show featuring some of YouTube’s biggest stars.

Produced by Collective Digital Studio, filmed at YouTube Space LA and featuring 20 creators including Harley Morenstein (pictured right), Freddie Wong, Rhett & Link, and Toby Turner, the event will be live-streamed on AdBlitz. The channel is a hub for pre-game commercials, as well as those that air on game day. It will also feature a post-game gallery where advertisers can continue the conversation with consumers with extra footage from their spots. Additionally, YouTube is hosting a contest where fans can vote on their favorite game-day commercials until Feb. 9.

There is no fee or minimum media spend for advertisers to participate, and only those who are running ads on NBC during the game are eligible.

Many of the brands that participate in AdBlitz end up running digital marketing campaigns to support their ads and teasers and to encourage fans to vote for their ad, explains Andrew Swartz, communications manager at Google.