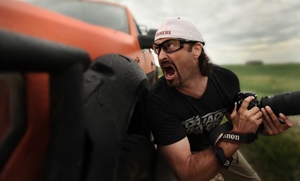 The Saloon Media show, which originally aired as a CMT digital series in Canada, has now landed a deal for a 10-episode TV season.

Saloon Media’s Tornado Hunters has been greenlit for a 10-episode season to air on Corus Entertainment’s CMT in Canada following a successful run as a digital series and a strong broadcast pilot debut.

Tornado Hunters was originally produced as a CMT digital series as part of the Bell Fund’s TV development online program. The 5 webisodes were launched on Aug. 18, and included prompts from CMT that asked fans to provide feedback on the series through the #CMTTornadohunters hashtag.

The fan engagement on the web series via social media was particularly strong, which Corus said helped make Tornado Hunters the highest-performing video content in the history of CMT.ca. The social media feedback was also used to help shape the series’ broadcast pilot, which aired on Oct. 26, 2014.

Each episode of the first season of Tornado Hunters will be a half-hour long, with production slated to start in March. The series is produced by Saloon Media in association with CMT. Paul Kilback is producer and director with Tornado Hunters. Michael Kot is executive producer on the series, and Betty Orr serves as head of production.