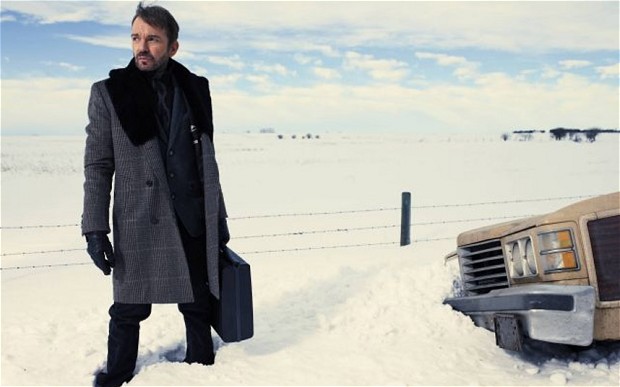 The streaming service will become the exclusive SVOD home to Fargo and other new and upcoming primetime series from FX and FXX.

Hulu announced 2 exclusive streaming-rights deals this week – one with FX and another with Metro-Goldwyn-Mayer (MGM).

The Hulu SVOD window on new series begins after the shows have completed their initial run on TV.

Additionally, the first seasons of FX and FXX’s new 2014 primetime shows Tyrant, The Strain, Married and You’re the Worst will become available exclusively on Hulu Plus in advance of their second-season premieres. Hulu also gains exclusive subscription streaming rights to subsequent seasons of those shows. Prior seasons of currently-airing shows will be made available on Hulu before the new season premieres.

On Friday, Hulu announced it has also scored the exclusive streaming rights to the FX series Fargo (pictured) as part of an expansion of its relationship with the show’s producer, MGM. All episodes of Fargo‘s first season will be available on Hulu next year.

The MGM deal will also bring all episodes of the History series Vikings to Hulu, which is currently streaming seasons 1 and 2 of the show, and give it multi-year, non-exclusive licensing rights to over 1,500 episodes of shows from the MGM catalog. This includes the Stargate franchise (Stargate Universe, Stargate Atlantis, Stargate SG-1), ’60s hits Flipper, Green Acres and The Addams Family, cult favorites Thirtysomething, Dead Like Me and Outer Limits, and family titles such as All Dogs Go to Heaven.